A Case for Cloistering 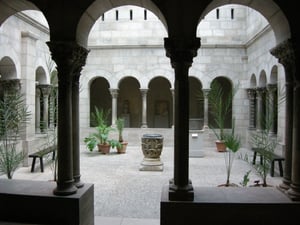 Throughout the ages Christian monks have cloistered to free themselves from the ungodly influence of the outside world. The seclusion and the freedom from the day-to-day rat race provided them increased opportunity for study and prayer that was not otherwise available. That tradition gave us some fine scholarly work in areas as diverse as Christian doctrine and agriculture. Indeed, Western Christian thought and heritage was preserved by such cloistering. In our age of mega schools and assembly line secular education, I want to suggest that Christian children can benefit from the cloister-like atmosphere at a small classical Christian school.

One of the problems with a statement like that is Christians are called to spread the Gospel in the world, and that is hard to do when cloistered. But I am not calling for all Christians to withdraw from the world. I am merely suggesting that we should provide our children with the shelter and safety necessary to grow strong in the faith before we send them to spread the Gospel and do battle in the world.

I often quote or paraphrase G.K. Chesterton who maintained that education is the “transfer of a way of life.” God’s people are commanded by God to transfer a Christian way of life to our children, and not just for three hours on Sunday morning (Deuteronomy 6:4-9). Every education, whether in the public school, the prep school, or the small but serious Christian school is transferring a way of life to the children who are imbibing it. What Chesterton seems to have seen so clearly is that children of school age are in their formative years. I would add that the God who makes children made them that way for their own good—see again Deuteronomy 6. Children are learning and practicing now for the kinds of adults they will eventually become. They are being formed by their every encounter. And that is why cloistering is so important for Christian children.

We all can recall instances from our childhoods that remain with us for life. The negative ones seem most powerful, whether sights we should not have seen, fights we were not prepared for, or conversations that opened our eyes to ideas we were not yet mature enough to process. Perhaps even more powerful and lasting are the instances we do not recall—not even so much instances as the filler between the instances that was simply residue of the environment we were in. Both the instances and the residue are part of who we are now as adults, and we spend the rest of our lives trying to undo the damage. When we were children, our foundations were being formed, and a lot happened while the concrete of those foundations was still wet. Now the concrete is dry and we are stuck with the damage.

It can be different for our children. I have heard all the arguments against sending children to small Christian schools, but I have also lived the success of it with my own children. While they are not perfect and their small classical Christian school was no Utopia, the concrete in their foundations is beginning to harden with far fewer eternal imperfections and flaws than my own. The keys to this formation were community and purpose. Every school is a community, complete with its own purpose and a culture that flows from that purpose. What I am proposing, then, is that a small classical Christian school has the right community and purpose to produce a nurturing culture for Christian children, one that trains them up in the way they should go, coming alongside the church and family that are also working to do just that for their children.

Consider that your own children are being formed right this minute into what they will always be. Every encounter they have along the path of education is building their foundations, even transferring to them a way of life. Now is the time to cloister them away with their own people in a place where you can know that the foundation being laid is for the glory of God and the eternal good of your children. Do not be fooled into enrolling them in a school that has a different purpose.