A Few Ideas for Teaching Stewardship to Children 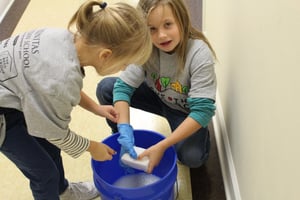 One of my favorite teachers sometimes reminds her class of nine-year-olds that they came into this world with nothing and that they would have nothing still if their kind and benevolent parents hadn’t given them everything they need. She usually issues that reminder to her students in the context of a pep-talk about taking proper care of their clothes, lunchboxes, backpacks, pencils, binders—you get the idea, but it also extends to care of their desks, chairs, books, and other non-consumable items they use at school. She refers to these items under their care as their little kingdoms. If they can take good care of those little kingdoms, they will someday be prepared to rule well over larger kingdoms—households, businesses, churches, and governments, for example.

Stewardship is a good word to describe what the teacher is trying to get those nine-year-olds to understand. It is the idea that people ought to take proper care of the things they’ve been given, and especially so if those things have been entrusted to them for a period of time and then will pass on to someone else. This idea of stewardship is based on the Christian principle that God has given us the world to tend and take care of. There are about as many different plans for how Christians are supposed to care for the world as there are Christian denominations, but many Christians agree on the basic premise that God has made us stewards of the world and everything in it. Those Christians will want to teach and train their children to be good stewards as well—to rule well over kingdoms they will inherit. What follows are a few ideas for doing that.

Have your children make their beds each morning. A good steward will establish order by setting things aright, or putting things in their proper place and proper state. A bed that isn’t being slept in should be made up so it is ready, clean, and inviting when it is time to use it again. Development varies a little by the child, but most three-year-olds have motor skills necessary to begin learning this little chore.

The old adage, a place for everything and everything in its place, is a maxim for good stewards. Keeping good order and organization of all our things not only makes our surroundings more beautiful but also makes life just a little easier, especially when the most important task in that moment of life is finding one’s school shoes at 7 o’clock on Monday morning. Whether it’s school shoes, toys, or the kitchen scissors we used for yesterday’s art project, when each of our things has its own place and gets put back there as soon as we’ve finished using it, the likelihood of its not getting misplaced or damaged is greatly increased. Even toddlers can learn to be responsible for putting things back in their places. My wife’s rule when our boys were little was that they could not move on to the next adventure until they had returned everything from the last adventure to its proper place.

Teach your children the value of what you provide for them by having them pay to replace items they mistreat. This may seem a little harsh at first blush, so let’s establish some parameters. First, growing, happy children are bound to put holes in the knees of their jeans—let’s consider that normal wear; call it the cost of doing business. Not only that, but kids are going to ding the family sedan at least once while they’re learning to ride a bike. Again, that’s something you signed up for—wait until you start teaching them to drive that family sedan. The sort of thing I am talking about is setting off a pack of firecrackers in a lunchbox or using sister’s baby doll as a hammer. If children are taught from the earliest age to use things as they were intended to be used and not to be destructive, the consequences for doing differently should sting. When Billy has to spend some of his birthday money to replace his lunchbox, he will be getting a taste of what it costs Dad and Mom to keep him adequately outfitted for life, and he’ll likely think twice before mistreating other things that have been provided for him.

Have your children pitch in around the house. Children can do so much more than we give them credit for. Even children too young to go to school are able to fold laundry, help wash dishes and set the table, feed pets, take out trash, sweep, scrub, pull weeds, and all sorts of other tasks that allow them to participate in being good stewards of the household. Taking on these sorts of chores alongside their parents and siblings gives them a sense of belonging and responsibility. Nothing teaches and trains good stewards like practicing stewardship.

These are just a few simple things you can begin doing to help train your children to take proper care of the things you give them. With a little thought about your individual situation, you could add dozens of ideas. The lessons they learn will permeate all that they do when they learn them organically by working alongside you and take them in simply as part of who they are rather than as a checklist of jobs they must do.

Whether they are prepared or not, your children will inherit the rule of a lot more than a school locker or a bedroom—they will someday rule God’s world. You want them to be ready for that task, so start now by teaching them to faithfully steward their little kingdoms in preparation to faithfully rule the whole world when they are grown.