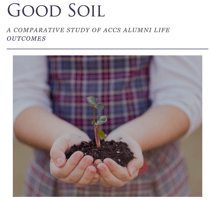 In his book Norms & Nobility, lifelong scholar and educator David Hicks asserts that right thinking ought to lead to right acting. The idea is that a proper education should lead one to think rightly about the world and everything in it, and that such thinking should be followed by actions that are in accord with it. Proverbs 23:7 comes to mind, “For as he thinks in his heart, so is he.” The passage refers to a miser or one who has an evil eye, but the principle also extends to the kind of people who are generous and don’t have evil eyes. It is just the way people work.It is little wonder then that those who have a broad, liberal education tend to act upon what they have been taught to think, just like everyone else acts upon what they have been taught to think. The difference is that those with the broad, liberal education—a classical Christian education to be exact—are going to act on big, world-changing ideas. They have the education of free men, not the education of slaves that prepares them only for certain tasks and duties in a society run by others. It follows then that alumni of classical Christian schools are more influential in society than alumni from other schools.

This is the last week we will examine the results of an education survey by Cardus and the University of Notre Dame. The Association of Classical Christian Schools has compiled a report on the survey titled “Good Soil.” As we complete our review of the report, this week we’ll summarize the last of its seven profiles: Influence. Just to refresh your memory, this report examines alumni between the ages of 24 and 44 who graduated from six different types of schools: public, college preparatory, Catholic, Evangelical, homeschool, and ACCS schools (like Trinitas). All of the alumni surveyed grew up in Christian homes.

Perhaps the secret dream of all mothers is to have their children grow up to be President of the United States. If we are talking about being influential, nothing could top that. But there is only one president at a time while there are millions of regular people in position to affect change in the world. This latter kind of people can make a tangible difference in the world every single day if they think and act right. While a president will likely spring from the ranks of classical Christian alumni eventually, in the meantime, tens of thousands of these alumni are out in the world turning right thinking into right acting for the good of mankind.

While alumni from other evangelical schools and homeschools stick close to their Christian circles, Classical Christian alumni are out in the world. Nearly 90% of them are active in other organizations outside of their churches. We learned in an earlier profile that cCe alumni are far more likely to continue in the faith after graduation and to be active in their churches, so their activity outside of church does not replace church but is in addition to. And what kind of organizations are they active in? The ones that bring positive change to the world. I would venture their involvement is in organizations whose actions align with Gospel thinking. Almost 60% of cCe alumni, one-third more than any other group, believe they can change their communities and politics for the better. They are empowered.

Furthermore, alumni of classical Christian schools don’t only believe they can bring change for the better, but actually believe they have an obligation to make the world a better place. Nearly half feel that obligation strongly—20% higher than the next closest group, prep-schoolers. They are also in a better position to make changes. Even though they may not have a friend in the White House just yet, 60% of cCe alumni know someone influential—someone in a position of power such as CEOs, politicians, or community leaders. These alumni are nearly twice as likely as the alumni from other schools to use their connections and to actually engage the obligation they feel to change the world for the better, even if that takes the form of protest.

Alumni of classical Christian schools are broad, fair-minded people. They are faithful and do not compromise on Absolute Truth, but they do not cloister either. They are at work in the world using what they have been taught to change the world for the better. They do not stay at home, preaching to the choir as it were, but engage powerful people and those who hold very different positions from their own. They have been taught right thinking, and they have turned it into right acting.