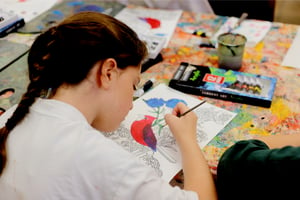 As the school year winds down, we enter the season for reflection. For students, now is time for final performances, academic awards, and the accumulation of all kinds of accolades for the year. I am always a little in awe of Trinitas students as I look back over their accomplishments and realize all they have done, and done well, in a single year. Surely this euphoria upon reflection holds true for any hardworking student in any school—it is not reserved for Trinitas students. I am, however, always amazed at the number of Trinitas students who do so very well over the year in such a wide variety of activities. What I have found is that classical education exposes students to a broad range of experiences and then provides opportunities for students to learn, perform and compete in activities as different as baseball and drama. By encouraging students to drink deeply from many fountains of knowledge rather than specializing in one, classical education creates Renaissance men and women.

In contrast, American culture has been moving for decades toward more and more specialization in everything, which naturally leads to more specialization in education. The modern student is encouraged to devote himself to one passion, to say, I am a baseball player and can do no other; I will play in the major league or die. Or to say, I am an actor; I could not possibly devote attention to baseball this spring. For a student to be singularly focused and to become a virtuoso in a particular field is certainly admirable, but few students are able to achieve that level in spite of giving their best day in and day out. If a student devotes himself to one activity at an early age, let us say the violin, but never achieves greatness at it, what has he missed? What else might he have tried during his formative years? Wouldn’t the student do better to try a great many things, to learn a great many things while he is young, to be exposed to much?

Classical education by its very nature urges students to take up a variety of interests.

Academics, of course, are a priority, but there is also a high priority on art, both applied and performing, and music, be it individual instruments or choral performances. Still there is room for athletics and community service. The education is broad, and it encourages students to drink deeply from as much of it as they are able. Classical is not a single course meal that pigeon-holes students into a specialization, nor is it a casserole that mixes together a little sampling of a few things, but it is a glorious feast that sets before the student rich and satisfying portions of foods he might never even have heard of but that he is nonetheless urged to taste—yes, and taste them all.

No better example of what I am talking about comes to mind than a partial rundown here of what Trinitas students have accomplished this year. I ask you to forgive me ahead of time if I sound a little boasty, but again, these students always amaze me.

In a school wherein academic standards are high and the academic program is challenging, nearly one-quarter of Trinitas students will receive awards for making all A’s for the entire school year. Another one-third of the student body will have made all A’s and B’s. There are no multiple choice tests here, no electives that give students a goof-off hour, only writing and public speaking and grammar and classical languages and logic and rhetoric and calculus and …

We are a school of fewer than 150 students. The next smallest school in our conference is larger than us by about one third. We are the only school in our conference that does not allow homeschool students to play on our teams to broaden the pool of players. We allow our teams only three touches per week—no matter the combination of practices and games, they only meet three times per week. Yet our volleyball and baseball teams won their conference championships, and the soccer team was conference runner-up. Those are the only three sports we participated in this year.

Our students just finished an amazing show that was full of singing and set changes and actors playing multiple roles. They played to a sold out crowd for one show and a nearly sold out crowd for the next show. The actors were not the elite few who want to pursue acting as a career, but nearly half of the upper school students, some of whom have never acted before. It was a tremendous performance anchored by seniors.

Our annual art show ended last week. Both walls of our Grand Hall were filled with beautiful drawings, paintings, photographs, and sculptures. More than half the school participated, showing off not only work they have done in art class, but even more so the work they have pursued outside of class on their own time.

Last Friday night was our annual recital. Nearly half of the student body participated by playing a piano, violin, cello, or flute piece, or with a vocal performance. The performances were excellent, showing that the students have worked hard, not only during their short in-school weekly lesson, but for hours on their own time. At the end of this month every student from 4th through 12th grades will perform in our annual spring concert to close out the school year. If it is in keeping with past years, it will be phenomenal.

What is noteworthy here is that the things I have mentioned have drawn in the whole student body—not only one or two but many students have participated in every single activity listed above. Even more participated in most if not all of the activities. These are not virtuosos, students who specialize. They are students who have been introduced to worlds they may not have imagined were accessible before and have been empowered to try everything put before them. And because of the classical training and work ethic that has been nurtured in them, they do a wide variety of things very well indeed. Classical education is no path to specialization. It is broad and deep, and it empowers students to become Renaissance men and women, excelling at whatever they put their hands to.