Commoners in the King’s Court 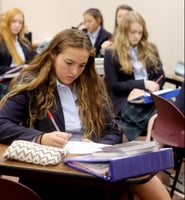 Recently in this space I lauded the ability of Trinitas graduates to get into the colleges of their choice. Our students work hard in a rigorous academic setting and often attain the goals they are aiming at, college being one of them. Even though our teachers encourage students to do their best rather than focusing on grades, the grades often come to students who work hard and have some academic talent, and getting into a good college is one reward for that. But the story doesn’t end there.

Alas, we do not live in a world where all things are equal, no matter how many trophies we may give to last place teams. The truth is that some students don’t have as much academic talent as the group mentioned above; they have different gifts instead.

Some of those students can make great grades in spite of less academic talent because they work so hard. These students make up for any lack of raw talent by getting up earlier, staying up later, and outworking everyone in between. They get into good colleges and usually end up employing their former classmates. They always have to work just a little harder than everyone else and that practice gives them an edge when they get into the marketplace.

Other students work super hard just to get passing grades. These students also learn to work harder than their peers, but their reward is different. They may not end up at Harvard or even at Auburn. They often end up at a community college or a trade school. These students may ask themselves if there is even a place for them at Trinitas. “What is the point,” they may ask, “of learning Greek and Calculus if I am planning to be a welder or a stay at home mom?” Good question.

The classical education Trinitas offers is one that was originally intended for the aristocratic class, the ruling class. Historically, that was the only class with enough leisure time to pursue such an education. In the United States compulsory education and child labor laws mean all children get some kind of education, so they already are ahead of most of the children in history. For those fortunate enough to attend a school like Trinitas, however, an excellent classical education that was at one time only available to aristocrats is now available for children in middle and lower middle class families. This situation has the potential to change the world for good.

Because of this accessibility to the education of the ruling class, for the first time in the history of the world welders and stay at home moms can read the New Testament in its original language. Now the middle class can understand Machiavelli and all its political implications. Finally, common people can develop an appreciation for Mozart and Michelangelo. Never in the history of the world has it been more possible to move up in class—that is the American Dream for goodness sake. But there is so much more to it than that.

Never in the history of the world has it been more important for good people, Christian people, to be well educated—not so much with a specialized set of technical skills even though those are so very useful, but with a liberal education that cultivates wisdom and virtue, and education that helps people see past rhetoric aimed at enslaving them to some false ideology. If you don’t believe me, turn on the news.

It will be important for our next generation of rulers to have an education like the one Trinitas offers, but if it is within our power to give even our common folk such an education, shouldn’t we do it? Our children need to be able to discern between good and evil influences and to stand up for the former. This is true as much for welders and nurses and mechanics and stay at home moms as it is for senators and lawyers and businessmen and kings.

So for the student who is laboring hard to pass classes at Trinitas when he or she knows that the next step is vocational or technical training, not a law degree or a PhD in Chemistry, I say, take heart. You are developing a work ethic that will serve you well all your life, no matter what vocational path you follow. More importantly, you will be uniquely equipped with the education of a king, an education that makes you better able to do the next right thing in a world that seems to be losing its mind. Everyday ordinary people doing the right thing changes the world for good faster than any policy any congress or president can impose.