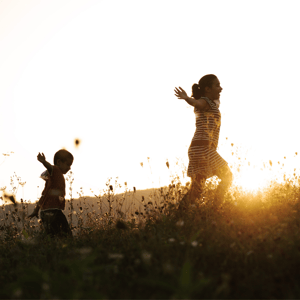 Last summer the wives of the Trinitas Board of Governors hosted a baby shower for one of our teachers. The ladies had a charge for the mother-to-be that they presented as five gifts for children. After reading it, I knew it would make a great summer blog series. It lines up well with many of the points Christian psychologist Keith McCurdy makes about raising “sturdy children” in this age of victim culture. I spent the next five weeks attempting to make those connections for our readers. It was a popular series, so after sprucing it up a little, we decided to run it again this summer. This week we start with the ladies’ original five gifts.

1. The Gift of a World Larger Than They Are

Babies come with a lot of stuff. Getting out the door to go anywhere with an infant requires skills and tactics worthy of a professional mover. They also come with a bunch of needs and demands and as their primary caregiver it can easily and almost immediately take over life as you know it. Without you even being aware of it happening your life can shrink to those needs and demands baby will place on you.  Remind yourself that it is okay for your baby to cry a little…to wait a minute or two before getting what they want, or even need, if you are in the middle of something. Teach your child that he is an important part of your life but not the center of it. If a child grows up believing that his desires and needs are more important than anyone else’s then he will live like he is more important than everyone else.

2. The Gift of Failure

Life rarely goes perfectly. The best laid plans can get derailed and things just simply don’t always happen the way that they should. Resist the urge to try to make everything perfect for your child. He needs to fail so that he can learn to strive and persist. After all, isn’t that essentially what our faith is…striving after godliness and persevering?

Not rushing in to fix everything for him, to not only allow him to do what comes easily and naturally but to try hard and difficult things, will allow him to learn how to cope when things don’t go as expected and it will help him learn to think creatively and outside of the box to develop problem solving skills. Another part of this gift is allowing him to fall down and get the occasional boo-boo and not overly coddling him. Kids need to be tough. If you teach him from the beginning that he is strong then he will grow up to be strong.


At the end of the sixth day of creation God declared that what He had made was very good. So let your child explore God’s creation. You will more than likely be gifted with rocks, weeds, and sometimes even critters as the world unfolds and is experienced by your little one. We know from Scripture that God says His created world reveals His glory. Allow your child to discover His creator through the creation.  Also it’s important to keep in mind that oftentimes hard work is dirty work, and you want to raise a good worker who isn’t afraid to get dirty.

4. The Gift of Their Sin

Now, that sounds crazy, doesn’t it? Sin is the bad stuff, the stuff we don’t want, right? Exactly. So resist the temptation to make excuses for your child’s sin. That sweet precious bundle of humanity that will make your heart feel love in a way that cannot be explained but only experienced is also a wretched little sinner in need of grace and forgiveness and redemption. It is okay, and actually smart to recognize what might be causing him to sin, but don’t use those as excuses for his sinful behavior. He might be tired or hungry or you may have had a really busy weekend and he is off schedule. The other kid may really actually be a brat. But you want him to know the right way to behave, respond, and react in all situations. Helping him own his sin as a child will help him honestly face and deal with his sin as an adult.

I know, that sounds almost as crazy as the last gift. Because as Christians we talk about love a lot and we should because our God is a God of love. He shows us and tells us over and over again what love is and how it should look. It is patient and kind. Not boastful, arrogant, or rude. It doesn’t seek its own and isn’t irritable or resentful, it doesn’t take pleasure in wrong doing and finds joy in truth. Bearing, hoping and believing. That is love. We want our children to know how bright and perfect and big and grand His love is for us but a lot of the time we try to do that divorced from just how ugly sin really is, how fallen the world really is. When we do that we actually end up dimming the glory of God’s love because we forget that light shines brightest against real darkness. You want your son to know what he is supposed to hate and why. And to do that you have to teach him how dark and evil real sin is.

I’m not saying you need to be gratuitous in teaching your child about sin. You don’t have to use explicit or graphic language, but I do what you to remember that if you want him to truly see how big God is, how huge Jesus’ victory really was, you must teach him the truth about sin and just how big the battle was, and is. The sin you want him to recognize and run from as dangerous has to look dangerous.  It has to be in proportion to the grace you are pointing him to everyday of his life. So teach him to love rightly, to love the things of God. But also teach him how to hate rightly. He needs to be able to do both.