Give Students a Community in Which They Can Thrive 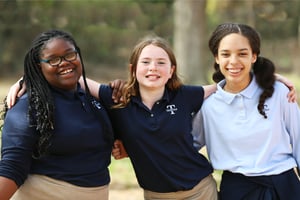 This week we are continuing our series about the goals of classical Christian education and the pathway to reaching them. Last week we started talking in earnest about that pathway. I suggested there are four key elements in the classical Christian model that make up the pathway. This week we take up the third and fourth elements: a structured and orderly learning environment and a Christ-centered community of like-minded families.

A Structured and Orderly Learning Environment

The Proverbs are very clear, “A child left to himself brings shame to his mother” (Prov. 29:15), yet we live in a child-centered culture where mom and dad feel pressured to let junior call a lot of the shots. We can blame it on the rise of secularism or the sway of pop-psychology or the influence of Hollywood or something else, but the signs point to a culture that has become far too quick to yield the decision making to its children.

I don’t propose to solve that problem for America today; but I do think God’s word is sufficient for God’s people, and in His word He has said, “Train up a child in the way he should go, and when he is old he will not depart from it” (Prov. 22:6). In Ephesians 6:1 God tells children to “Obey your parents,” and in Exodus 20:12, “Honor your father and mother.” It seems solidly true that from God’s perspective, children aren’t supposed to be in charge but are to follow the lead of their parents instead, and that if they do, good will follow.

No surprise, then, it turns out, children thrive in structure! They flourish in an environment where the expectations are made very clear to them so they know where they stand at any given moment. This sure standing keeps them from having to guess where the boundaries are and gives them great freedom to run within those boundaries. And that is why classical Christian schools like Trinitas are determined to provide an environment of order and structure for students.

Our days are ordered and our class time is structured. The administration and faculty are intentional about what happens and when it happens during the school day, but not in some Pavlovian sense so that children all spring into frenzied action at the sound of a bell; rather, teachers release their classes at an appointed time so students interact with a human instead of a bell. The youngest students receive permission before speaking in class until they cultivate the etiquette necessary for open class discussion. Classrooms are not child-centered in that students do not decide what will be learned when; teachers drive these decisions, and they are held accountable by curriculum guides with objectives.

Some may protest that this order sounds forced or seems stodgy, and may wonder if children’s creativity is squashed by such structure. Remember, though, God has fashioned the world such that adults are supposed to order the days of children. And when we do that faithfully, what happens might be counterintuitive to us: children learn self-control, they feel freer and safer to explore and be creative, they begin to imitate God by bringing order and structure to their own corner of the world, and their school becomes a place where locks are not needed on the lockers and snack vending can be on the honor system. God’s plan never fails.

A plan that is never put into action or only haphazardly so always fails. An environment such as I have described above is not established by chance, nor can it be sustained without the general agreement of the school’s stakeholders. There must be a commitment to Christ among board, administration, teachers, and parents—a commitment to Christ that is stronger than any earthly bond, a commitment that is not for sale or trade. And then Christ must be at the center of every facet of life, from diaper changing to grave digging. This Christ-centeredness is more than sharing the Gospel or including beautiful music in a worship service; though, it certainly includes those things. It is more about learning, as we live, to surrender every facet of our lives—even the mundane and common parts—to Christ so that as we mature we become more and more like Him.

When a group of people believes this together and are willing to offer up even their children’s education to this way of thinking, well, something very special happens. Everything begins to come together. The other three key elements on this pathway are sustained by this one so that reaching the goal of classical Christian education all of a sudden becomes possible. We have said the main goal is a virtuous human being whose life is joyfully submitted to Christ. A Christ centered community of people all pursuing Christlikeness in their own lives could hardly be satisfied with any other goal. A community only partially committed, however, will pull itself to pieces while pursuing a schizophrenic approach to several competing versions of the goal.

Next time, we will set out to answer the final question: Is there a better path for reaching our goal?