How Do We Accomplish the Goals of Classical Christian Education? 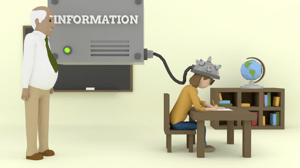 We are continuing our series intended to remind what the goals of classical Christian education are, why those goals are good for the world, and how we pursue the goals of classical Christian education at Trinitas. I began this series with a metaphor about traveling and the questions one might ask oneself while traveling on a particular journey. Continuing that metaphor, now I set out to answer the question how do we get there? This is a big question, and it will take time to unpack even the merest tip of the iceberg.

How do we get there?

We have established that the end goal of classical Christian education—the destination to sustain the travel metaphor—is a virtuous human being whose entire life is surrendered to the lordship of Jesus Christ. That is a decidedly different goal from most education models and so we should expect the curriculum, the pedagogy, the classroom, nearly everything to look different. There is no reason to think that the curricula or methods of a prep school, a high ranking suburban public school, or even a prominent modern Christian school will look the same as a classical Christian school because those schools are simply pursuing different goals.

The classical school will pursue its goals through four key elements of the classical Christian model: a faculty of imitable teachers, a high academic standard, a structured and orderly learning environment, and all of it bound together in a Christ-centered community of like-minded families.

Because Luke 6:40 tells us a student will become like his teacher, there is no substitute for teachers who model Christ-likeness to their students. Such teachers hold their students to high standards of Christian living in the classroom. These teachers do not wink at sin but call it by name and urge their students to put it off. This can be a difficult arrangement if a student’s primary interest is a grade, or even worse if he is just trying to get by with the smallest effort possible. The teacher will not be so much focused on the grade or on the ease of just getting by, but on encouraging the student to put off every sin that weighs him down so he can run with endurance the race that is set before him (Hebrews 12:1). True, what God has put before him during this season of life is school, and grades are a measure of how well he does that, but the teacher will be more interested in the effort the child is putting forth and in pushing him to do whatever he does “heartily as to the Lord” (Col 3:23). This way, the cart is not ahead of the horse. The student learns Christian diligence and work ethic first. The grades he deserves will follow, but his lesson will be to do everything God puts before him with all his might (Ecc 9:10), not simply to work when there is a visible and earthly reward attached. Rewards follow effort, and all effort must be first surrendered to Christ.

One of the downfalls of Western society occurring during my lifetime has been the lowering of standards in most every sphere of human endeavor. Education has been a leader in this lowering of standards, and because students are human, they have sunk to meet the standards. We have done them a grave disservice. We now live in an excuse culture. There is a form of victimhood to fit every perceived malady that keeps us from doing what we ought to do and encourages us to feel good about low standards. Classical Christian education seeks to ignore this movement. We not only hold a hold high standards for Christian living among our students, but we also hold high academic standards because, after all, we are in the education business.

Kindergarteners memorize whole chapters of Scripture word-for-word. They are to know every jot and tittle and are counted off for missing the slightest “a” or “the” in their recitation. Harsh? No, loving. We give them a high standard and they rise to the occasion, often memorizing their passages in half the time of older students. The young mind that reaches for the limits of its abilities expands those abilities just as the strong man builds muscle by lifting weights. To ask the child to do less is to set him up for a life spent coming up short of his God-given potential.

We teach spelling and grammar and writing—the language arts—through imitation. Students copy out passages of prose and poetry written by masters—passages that have endured the test of time because they are standard bearers for beautiful language well used. A time will come when students will have something worthwhile to say. It will be said well by them if they have been held to the high standards of the masters, and furthermore, they will have a better idea if what they have to say is worthwhile at all if they have their heads full of Scripture and the poetry and prose that are the standards for what is worth saying. If they have been constantly encouraged to say something worthwhile without being given the tools to formulate a worthwhile thought and say it well, their voice will be ignored by contemporaries and future generations alike.

Before leaving Trinitas—as is the case with most classical Christian schools—students must produce and defend a lengthy thesis. This is the sort of exercise usually reserved for masters and doctoral programs along with only a handful of the best undergraduate degrees. Here, though, high school students bring their own thoughts to bear as they seek to put texts and art and ideas from history into conversation, often interacting with them in context with contemporary problems. The stakes are high. Failure is a possibility. Students are, just as in their kindergarten days, stretched to the limits of their abilities. Rising to this occasion, students are taught that their efforts matter, that precision of thought is important, and that an exchange of ideas is an exercise in loving one’s neighbor. They learn that rants and shouting matches are mere acts of selfish ambition.

God-fearing teachers living in community with students they love, and discipling them as they stretch to meet high academic standards, creates an environment wherein students can begin to practice virtue as they pursue Christ-likeness. Academic excellence will certainly follow for many students, but all will have spent their school years preparing for something more important than academic excellence. They will have been preparing not merely for graduation, but to live a virtuous life surrendered to Christ.

Next we will take up the questions of order and structure in the classical Christian model, what kind of community it takes to support this model, and whether there is a better path for reaching our desired destination.