Is There a Better Path? 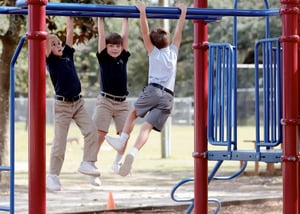 Two things are happening in this post. First, we are finishing up our series about the education journey by addressing the question, Is there a better path toward helping our children become virtuous human beings whose lives are surrendered to Christ? Second, and as a way of answering that question, we are kicking off a series about “The Good Soil” report that we endeavored to write a year ago but which was rudely interrupted by COVID-19. We have established that the goal for a child traveling the classical Christian education path at Trinitas is to become a virtuous human being whose life is completely surrendered to Christ. We have established why that is a good goal, not only for the child on the path, but for the world. We have also talked for multiple weeks about what the key components of the path are. So now, is there a better path?

The Association of Classical Christian Schools has joined with Notre Dame University and Cardus to complete a survey of alumni from classical Christian schools compared to alumni from other types of schools, both Christian and secular. The survey, completed in 2018, is reported in seven different “profiles”: college and career preparedness, life outlook, Christian commitment, Christian lifestyle, traditional and conservative values, independence of mind, and influence. Over the next few weeks we will explore a sampling of the findings in each of these profiles, but for the question at hand the profiles of Christian commitment and Christian lifestyle seem to provide an answer as to whether or not there is a better path than classical Christian education for achieving that goal of a virtuous life surrendered to Christ.

The short of it is this: alumni between the ages of twenty-four and forty-two who graduated from classical Christian schools (mostly ACCS accredited schools like Trinitas) are about twice as likely to regularly attend church and small groups, to read their Bibles regularly, and to volunteer at church than alumni from other Christian schools or homeschools. Granted, this is a summary statement that takes into account quite a bit of data, but it is a helpful snapshot nonetheless. When compared to alumni of secular schools, alumni of ACCS schools are about six times more likely to remain committed to the practices of Christianity.

Again, alumni from ACCS schools are almost twice as likely to live lifestyles in accordance with their faith as alumni from other Christian schools or homeschools, and five times more likely than alumni of secular schools. These classical Christian alums respect church authority and give to the church. They also exhibit moral standards consistent with orthodox Christianity; for example, they are less likely to be divorced or separated after marriage, and less likely to cohabitate before marriage. They are also more likely to volunteer outside their church and for more hours.

The survey is not definitive proof that there is no better path to a virtuous life surrendered to Christ than classical Christian education, but it does show that among the thousands surveyed, classical Christian was the best path. Neither does this survey prove that a child who graduates from public school or prep school cannot be a virtuous human being whose life is surrendered to Christ, but among those surveyed, the likelihood is far less. The bottom line is that classical Christian schools like Trinitas set out to cultivate virtue in students and to mold and shape them in such a way that they surrender all to Christ. The survey report shows that these classical Christian schools, more than any other types of schools, are often achieving the goal they set out to achieve. A better path? Not likely. View “The Good Soil” report for yourself.