Late to the Table 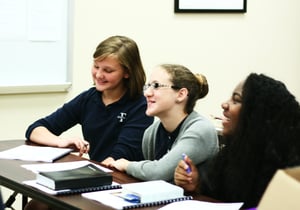 Even though we are barely halfway through the school year, this is enrollment season, and classes are already filling up for next year. Families are touring the school, meeting with our admissions counselor, and drawing comparisons between classical Christian and other models. At Trinitas our kindergarten classes are nearing full and we have accepted a few students for other open seats in the grammar school. The grammar school is where most of our effort to bring in new students is focused. There are two other natural entry points for schools: seventh and ninth grades. While we do accept students in those grades occasionally, it can be difficult to enter a classical school that late in one’s academic career, especially as late as ninth grade.

There are several reasons it can be difficult to enter a classical school in the middle and high school years; one is the lack of flexibility in when courses are offered. Often classical Christian schools are small when compared to public and even other private schools. Even well-established classical Christian schools often have enrollments of about 200 or fewer students. There are a lot of advantages to being a small school; even so, a school that size usually has little flexibility in course track.

This lack of flexibility creates a hurdle especially when an incoming student is on a different track for math and science than the school she is entering. Algebra can begin as early as seventh grade in other schools and as late as ninth while geometry and algebra II can be taught in any order. The order of the sciences can be even more diverse with biology starting as early as eighth grade and as late as tenth depending on the school. Sometimes these hurdles can be cleared if a student is willing to work hard to get on track over the summer.

Language is another obstacle that can be difficult for students coming into a classical school late. While some large classical schools may offer French and German as electives, Latin and Greek are the mainstays in all classical schools, and the smaller ones will likely offer only Latin and Greek, which is the case at Trinitas. The goal of the Trinitas Latin curriculum is for students to read primary sources by ninth grade. Next year’s ninth graders have been studying Latin since third grade and expect to read the Aeneid in Latin. Unless an incoming student has been exposed to years of Latin, this obstacle can prove too difficult. We attempt to offer all levels of Latin at the same hour in the schedule so incoming students can take a lower level class, but even when the schedule does work out that way, it isn’t always a good fit for the incoming student who has never been in a class with younger students.

Curricula at all classical schools are writing-intense beginning early in the grammar school. Ninth graders at Trinitas will write many multi-page papers on subjects as varied as history, literature, philosophy, theology, and biology. Speeches are another genre of writing that we heavily emphasize, and all tests—with the exception of math and some science—are essay tests. Over the years we have found this one discipline, writing, to be what hinders incoming students most. When one considers the fact that Trinitas seniors end their time at the school by writing a substantial thesis paper and defending it before the faculty and board of the school, one can quickly understand the importance of the trajectory students are on with their writing skills.

There are other challenges as well. Speaking in public (a lot) and assimilating the culture of the school come to mind as does embracing the distinctly Christ-centered focus of classical Christian schools like Trinitas.

With all that said, however, it is not impossible for a student to be successful coming in as late as ninth grade. Over the years I have known several students who have come in late, done well, and even graduated with honors. If the math and science tracks match up, the student has more than a little experience with Latin, and she has good writing skills, it could work. With those things in place, the rest depends on how hard a student is willing to work and how badly she wants a classical Christian education. The obstacles are many for a student coming in as late as ninth grade, but the rewards are high. If this sounds like something your incoming ninth grader wants, let us help you count the cost and explore the possibilities.