Lessons from a Dirt Pile 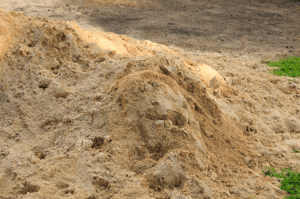 We’ve just packed away the tents and doused the fire on the annual Trinitas Father & Son Camping Trip. From beginning to end it was an opportunity for men to spend time with their sons and other men in a setting that disarms. The wilderness is no respecter of persons—a night sleeping on the ground feels the same for carpenters and bankers alike. Thus we were freed from the stations we occupy Monday through Friday and got to know one another better because of it.

The young men got to know each other better too. In a conspicuous area near the center of the campground was a big pile of hard-packed red dirt that a dump truck had deposited, presumably to serve as fill dirt that the camp caretaker can draw from over time to fill in washouts and potholes. The boys walked around the pile for the first hour as they worked with their dads setting up camp, apparently taking very little notice at all of the dirt pile. Once the work was done, however, and it was time to get a game of football or soccer going, some brave lad ascended the pile and proclaimed, “I am the King of the Hill!”

Well, as you might guess, his reign lasted about as long one of President Trump’s cabinet members. Truth is, it took about a minute and a half for every boy in camp to begin his own pursuit of the kingdom so that the average length of rule for the King of the Hill was about two seconds. The turnover began quickly and lasted all afternoon, into the night, and all day the next day. For the watching Dads, regime changes appeared violent at times, and it was all we could do to keep our inner mother from stopping the whole thing for fear of broken bones and hurt feelings. Somehow, though, we pushed past that, and because we did, some valuable lessons were learned by sons and dads alike.

Boys are made with a natural strength that yearns to be tested. They need to compete, to wrestle, to establish a pecking order. When they do not have a good outlet for those things to work themselves out, they may become bullies or sissies or cowards or other creatures that society despises. In a game like King of the Hill, boys are able to test their strength against other boys and learn where they stand with each other. This is play that edifies boys because it helps them understand their own strength, what they are capable of and what they are not.

King of the Hill also helps boys learn that teamwork and strategy can trump strength. In our game, we had boys from age five to eighteen playing. When an older boy ascended the throne, the younger boys would have to plot together how to take him down. Some bids were successful and some weren’t; nonetheless, it was a glorious sight to watch a half dozen yelling third graders charge the hill to bring down the much older and stronger king. It was reminiscent of scenes from Braveheart. This kind of play teaches our boys that with teamwork and strategy they can defeat a much stronger opponent.

There is also an element of stewardship here, especially for the older boys. The high school boys could very easily have flung little guys down the hill mercilessly, but instead, they had to learn to throttle back their own strength, to exercise control of their power so as not to seriously injure one of the little fellows. Of all the lessons boys learn about strength, this one may be the most important. A man must know his own strength and at the same time know that it requires even greater strength from him to restrain that strength. Men spend far more time stewarding their strength by controlling it than they do letting it run loose. This lesson has to be learned somehow, and far better for it to be learned at play than in a hundred other settings we can think of.

Finally, we dads learned to ignore our inner mother and let the boys go at it. Boys need to test their strength, find out what they are made of, fail, succeed, and fail some more without dad coming to the rescue for every skinned knee and bruised ego. We live in the age of helicopter parents who hover around their children, micro-managing every detail of their lives. Children of such parents stay dependent further into adulthood than any generation ever has—this is especially true of young men. In recent days we have learned of the next iteration of helicopter parents; they are called snowplow parents. They work behind the scenes to plow an easy path for their children, one free of any obstacle that might challenge their children or prove them to be something less than perfect. Because this is the kind of cultural pressure on parents, it is all the more important for dads to let their boys go at it, learning to be tough when their knees are skinned and to get over it when their feelings are hurt. Perhaps the greatest display of strength I saw all weekend was that of the dads restraining themselves from stopping a rousing game of King of the Hill.

King of the Hill may not be the magic cure for all we see wrong in our culture. But boys do need to feel their strength, taste their own blood from a busted lip without getting mad at the kid who elbowed them by accident, and fail miserably and then find the courage to get up and charge the hill again. All these little lessons prepare boys to be good men, and what could be the cure for a lot of what is wrong with our culture is a generation of good men.