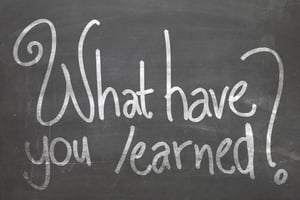 Sometime around the end of the nineteenth century, American colleges and universities began to use a form of grading students that resembles what most high schools, colleges, and universities still use today: A, B, C, D, and F. The grades are intended to be a way of measuring and reporting a student’s performance on a given assignment or within a given subject over a period of time. They are useful for that task, but far from perfect. At Trinitas we also grade students using a variation of the aforementioned marks.

Shortly after grades were put into use, high grades—A’s and B’s—became the coveted prize of students, and as human nature would have it, those marks, or measures, became more important to students (and others) than the thing being measured. There is something in us that wants to abbreviate everything, to sum it all up in a clever label or a catchy bumper sticker, to sort everything according to some shorthand symbol and then wear that symbol like an identification badge. Grades scratch that itch in us, and that is one of the biggest problems with grades.

Now, the conversation about grades and grading is labyrinthine with tendrils and trails and switchbacks and double-backs going every which way. There is a lot to talk about, and we simply can’t address it all in this space. I do, however, want to spend a few minutes talking about one aspect of grades that we can all do something about.

As I said, grades are intended to measure and report on students’ performance; in other words, grades are intended to measure learning. Again, they aren’t a perfect measure, but that’s one of those double-backs and a conversation for another time. More to our point today, I want the Trinitas community to begin placing more emphasis on the thing being measured—learning—than on the measure itself—grades.

If we value the grade above the learning, we are almost certain to create an environment where grades become an idol to us. When students begin to ask, “Will that be on the test?” they are betraying their real objective, which is to get a good grade, not necessarily to learn. They are showing that they are only interested in having the information that will be on the test so they can make the grade; and often material that is crammed in preparation for a test is not retained, not learned. If our teachers and students will focus on the teaching and learning processes, pouring all of their attention into giving their very best efforts there, the grades will take care of themselves without our giving them much thought at all.

Paul exhorts us in Colossians 3:23 to do everything we do “heartily, as to the Lord and not to men.” Again, Solomon in Ecclesiastes 9:10 tells us to do with our might whatever our hand finds to do. From these passages and others, one can conclude that God would have his people give our best at all times. It seems plain enough that doing our best with the gifts God gives us is a way of honoring him. Taking that attitude at school, and remembering that what we are doing is learning, may result in high grades, but more importantly, it will result in learning. The value for us is in the learning and the work it takes to do that learning. The grade is simply a measure of how we’re doing at that. Let’s focus on the thing that matters and let the grades be what they really are, just a measure of how we’re doing. Let’s resolve in this new year to turn our attention to learning what is before us before even considering the grade.