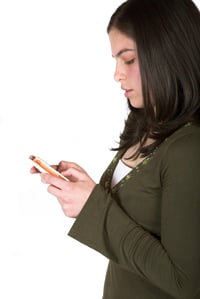 Last week I wrote in this space about cell phone use among teens. There is a lot to say about it. I can’t get to all of it, but it is a serious enough subject that I will revisit it more than once. There are a great many discouraging trends in our society today, especially among teens, which are beginning to be attributed to addictive smart phone use. Arguably the most concerning trend is the failing mental health of our teenagers.

Michael Ungar, Ph. D, therapist, researcher, and author writes in Psychology Today, “Kids are using their cell phones way too much and putting their mental health at terrible risk. National surveys are showing that kids today are more anxious than ever before, with spiking rates of depression and suicide.” Ungar also cites an uptick in Emergency Room visits for mood disorders and self-reported anxiety as part of the mental health crisis among teenagers.

How could cell phone use be causing such mental health trouble among our teens? I’m sure the possibilities are numerous and that the experts will elaborate on them all over time. The three I want to address here are bullying, something I will call cyber codependency, and isolation.

First, our teenagers are exposed to bullying as they never have been before.

When I was a kid, the bully was the guy who threatened to beat you up if you didn’t give him your milk money, and he would follow through. Today the bully may still beat you up, but he also has social media tools to ratchet up the pressure; many of our teens are feeling the squeeze. Ungar writes again in Psychology Today, “A recent article in the Canadian Medical Association Journal by a group of researchers based mostly in Quebec, Canada, found that among a large sample of teens 59% reported moderate exposure to bullying, and 14% reported chronically high exposure to bullying, both in person and online.” Sometimes inexperienced, immature victims cannot see a way out of or through such intense pressure. As we have seen too often in recent years, the result can be tragic.

Next is the phenomenon I am calling cyber codependency.

I am far from being a psychiatrist, but I am smart enough to see that many of our teens, and most especially girls, are getting their identities, their value, their self-worth from what others are saying about them online. In an article hosted on The Week and titled, “The Quiet Destruction of the American Teenager,” opinion writer Matthew Walther put it this way,

“Hell is not, strictly speaking, other people. But for a teenage girl, nine hours a day of other people evaluating your appearance and utterances as you attempt to negotiate their preferences and attitudes and jockey for some intangible sense of status is probably something very much like hell.”

As Christian parents, we are hopefully mature enough to know that our worth is found in Christ, not in what others think or say; however, a fourteen year old often does not have that same assurance, yet she has the whole world critiquing her selfies on Instagram. It is nearly impossible for her to be prepared for some of the responses she may receive to her naïve posts. How will she react? Many such girls, one in four to be exact, are responding by cutting or burning or otherwise harming themselves.

Finally, our teenagers are isolating themselves even as they think they are more connected to others than ever before. Social media, via the smart phone especially, has given us this sad paradox. The average American kid gets a smart phone long before he becomes a teenager, actually, and then spends an average of six to nine hours a day with his face glued to it, ignoring real flesh and blood family and friends in favor of those he interacts with electronically. If the isolation from community wasn’t bad enough on its own—and it is (Prov. 18:1)—there are other side effects that come with being connected to those you don’t know in a real flesh and blood sense.

One of the hottest trends is playing online games with people who could be halfway around the globe. You create your own handle and choose your own avatar and get to it. Sounds fun, right? Well, maybe, until your ten year old son is being flirted with in the game by some cute girl avatar that is actually being controlled by a 58 year old child porn addict in Jersey. Not so fun. But perverts aren’t the only danger. Just the other day I heard a report on NPR about a teenage boy who was being recruited into a Nazi group by a guy he met gaming online. By the time his dad figured out what was going on, he had almost lost his son to this recruiter. And he thought the boy was just playing video games. Withdrawal from a real community in favor of avatars comes at a price.

Friends, this is nothing, the tip of the iceberg really. There is some scary stuff out there. The truth is that we have put some mighty powerful and dangerous tools into the hands of kids who probably aren’t mature enough to handle them. We have opened Pandora’s Box and then passed it to our ten year olds like so much Thanksgiving turkey. The three things focused on here today are worth considering if your child has a smart phone because his or her mental health—at the very least—could be at risk, but there’s a whole lot worse where that came from. We haven’t even talked about porn and sexting yet. I implore you to do some research on your own. You should know what is out there, and you should know what your own child is doing on his or her phone. It is worth your time. Your kid is worth it.