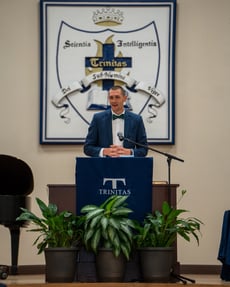 If God’s goal for the university is the exaltation and glory of Jesus Christ, surely Christians should see pursuing academic excellence not as a means of exalting self but as a means through which the exaltation of Christ can come and his glory be on display.

Yet, because the temptation to pride and self-exaltation is so common to us as human beings, I want to give three exhortations that students and parents may heed in pursuing not simply academic success but humble academic success.

For I delivered to you as of first importance what I also received: that Christ died for our sins in accordance with the Scriptures, 4 that he was buried, that he was raised on the third day in accordance with the Scriptures, 5 and that he appeared to Cephas, then to the twelve. 6 Then he appeared to more than five hundred brothers at one time, most of whom are still alive, though some have fallen asleep. 7 Then he appeared to James, then to all the apostles. 8 Last of all, as to one untimely born, he appeared also to me. 9 For I am the least of the apostles, unworthy to be called an apostle, because I persecuted the church of God. 10 But by the grace of God I am what I am, and his grace toward me was not in vain. On the contrary, I worked harder than any of them, though it was not I, but the grace of God that is with me (ESV).

The Apostle Paul in the 15th chapter of his 1st letter to the Corinthians gives an apologetic for the resurrection. He begins by rooting the resurrection first and foremost in the Old Testament Scriptures, and then he lists the various men that the resurrected Christ appeared to and in what order. Then Paul says in V. 8-9, “last of all, as to one untimely born, He appeared to me also. For I am the least of the apostles, and not fit to be called an apostle, because I persecuted the church of God.”

Pursue humble academic success by having an accurate, sober assessment of yourself.


Pursue academic excellence while realizing that your skills and abilities are a result of God’s grace.


Yet, this humility need not be false humility or hypocrisy. Because in the next verse, Paul acknowledges that he has labored harder than any of the apostles who came before him. And when we look at the NT, it seems like Paul surpasses all the other men in ministry success. And Jesus reveals through Paul depths and depths of truth regarding the person of Christ and the gospel. Remember in Galatians 2 when Paul says that he withstood even Peter to his face because Peter was wrong? Yet, he acknowledges in this passage not his ability but the Grace of God. He says, it was not I who labored, but it was Christ in me.

Pursue Academic Excellence while giving all glory to God


We’ve seen that while Paul acknowledged that his labor exceeded all the other apostles, he chose to view himself as “the least” of these apostles. He understood that it was only the grace of Jesus Christ working in him for holiness and ministry success. Consider the following practical applications for pursuing humble academic excellence: