Silver Tongues of the West 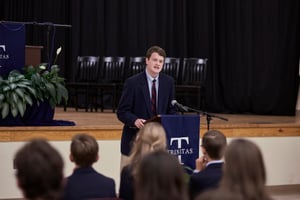 From Ancient Greece to the founding of the United States, one mark of western civilization has been excellent oratory. From Pericles to Patrick Henry and John Chrysostom to Thomas Jefferson (with Demosthenes and Cicero thrown in for good measure), the roots of western civilization have been nourished for more than two-thousand years by those with the ability to articulate lofty ideals in a way that leads to both understanding and inspiration in the hearer. We could call them the Silver Tongues of the West. But the West isn’t what it used to be. Oratory now seems most often employed to convince us to spend money on some product or to vote for a particular candidate. Of course it has always been used in this way, but it seems that in times past, good oratory was more memorably used by men such as those mentioned above to convince others of good ideas, the kind of ideas that change the world for the better.

Even though the West is losing its identity at a break-neck pace, the classical Christian school movement is heading in the opposite direction, educating some 40,000 students every year in the foundations of western culture and heritage in hopes of preserving the legacy the West has given to the world. One way classical schools are doing this is by teaching excellent oratory skills in hopes of reclaiming this important mark of western civilization.

At Trinitas, we start teaching the foundations of good oration, often referred to formally as rhetoric, in kindergarten. That may sound too difficult for five-year olds, but relax; we don’t ask them to deliver a fifteen minute extemporaneous speech. Instead, we start with foundational pieces: we teach them to make good eye contact with the person to whom they are speaking, to greet people cheerfully, and to speak clearly with adequate volume in all situations. We do ask more of them eventually, but these are the foundations upon which the rest of their rhetoric education is laid. Before they leave kindergarten, of course, they will have recited nine memorized passages of Scripture in front of the class and at least one memorized poem or story before an audience of several hundred. There will be a few other small opportunities, too, but these mentioned are the main oratory pieces. This kind of training gives our students a solid foundation for their rhetoric education that will continue through twelfth grade.

Part of the Trinitas Vision is to graduate young people who can articulate precisely, and we find it important to begin working toward that goal in kindergarten. The ability of our students to articulate lofty ideals precisely, and even with humble deference to the ideal and the audience, is one way classical Christian education is helping to preserve our Western heritage and culture; but more important is the fact that these students have been given the Gospel of Jesus Christ to spread to all the ends of the Earth. Even though the Gospel does not depend upon excellent rhetorical skills, our graduates’ ability to explain the Gospel beautifully will certainly not diminish its power. And it will put them in the prestigious company of other great orators in the western tradition who have been used to preserve Christendom for two thousand years. Long live the tradition of the Silver Tongues of the West!