The Dangers of Distracted Driving…or Studying 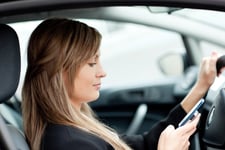 How often do we see someone driving erratically only to learn a moment later that he or she is texting or checking Instagram or performing a similar task on a smartphone? Most of us see this on the road every day…if we look up from our phones long enough to notice.

The roads have become more dangerous in recent years because we can’t seem to put our phones down long enough to drive. States have reacted by passing a variety of distracted driving laws that range from banning any hand-held phone use at all while driving to officers checking your phone for recent text activity if you happen to be pulled over for another reason. Currently every state with the exception of Montana has one of these laws on the books, and they were all passed within a couple of years as states scrambled to protect citizens in the face of what might be called an epidemic by a more sane culture.

Let’s face it, we should be thankful for these laws because perhaps they will protect some of us from ourselves or from the driver two lanes over whose text conversation with his co-worker is enough to tempt him to peek at that last text if it weren’t against the law to do so. And why should it be against the law? After all, humans are good at multi-tasking, right? Well, actually, no, we’re not really very good at multi-tasking as it turns out, especially when one of the things requires a great deal of focus from us, like driving. So thank goodness the law is on our side now to help make the roads safe.

And when we’re not driving, distractions from our phones aren’t a problem, right? Well, not exactly. If our phones can tempt us to give them our attention even in very dangerous situations like driving, it stands to reason they can be distracting at other times too, even if not quite so dangerous times. On NPR’s Morning Edition recently, Shankar Vedantam reported to host Rachel Martin that researchers have discovered through a cognitive test that the farther people’s phones are away from them, the better they perform on solving novel problems. Subjects whose phones were in another room outperformed those whose phones were in their pockets and considerably outperformed those whose phones were on the desk beside them. Researchers believe this is the case because our phones have an almost gravitational pull, even when they are merely sitting silently beside us. I can believe that. I am often embarrassed when I reflect upon how frequently I look at my phone during the day even though it has not beeped or buzzed to notify me of a message or email—and I’m not even on social media; text and email alone are yanking me around like I’m a dog on a chain!

I cannot stress enough what a problem this is for children and teenagers who have not the benefit of years that adults have. If we as adults are being all but controlled by our phones, imagine the effect those phones have on young people who simply have not yet developed the same powers of discernment and self-control.

What about distractions while studying?

Students resist the idea that their phones have a negative effect on their homework and studying. Often they argue that they may need to call or text a classmate for help with their homework. That is probably argument number one, but when parents press students about how distracting the phone is, the second argument is employed: “But mom, you know I’m really good at multi-tasking.”

If any parents are still falling for that multi-tasking argument, I suggest listening to Dr. Stephen Chew who is a professor of Psychology at Samford University. Dr. Chew has produced an excellent video series on how to get the most out of studying. In it he addresses this idea of multi-tasking:

“The research evidence is overwhelming that we are really bad at multi-tasking. We are bad especially if one of the tasks requires concentration and effort, like studying. What we’re good at is fooling ourselves into thinking we’re good at multi-tasking because all those distractions are more fun than studying. But in order to succeed you need to reduce, or even better, eliminate all those distractions. For every distraction you have, you reduce the amount you learn, increase the time it takes to understand the material, and increase the chance for a bad grade.”

Multi-tasking is not conducive to good driving, and neither is it conducive to good studying, so what’s a parent to do? I have a few suggestions for how we might protect our children from distracted driving or studying. First, resist the urge to give your child a smartphone. That’s right, just don’t do it. If you never get started, you won’t have to quit. I think my mom told me that about cigarettes—turns out she was right.

A few ideas in case your child already has a phone

One thing is for sure, as long as we have smartphones we are going to have to deal with the nearly irresistible distraction they create in our lives. Whether driving or studying or just meeting for a face-to-face conversation with other people, our phones will be exercising that almost gravitational pull on our attention even while they are sitting silently beside us. It is worth our time to learn some self-control and to help our children do the same—it might save their grades, or even their lives.