The Gift of a World Larger Than They Are: Finding Their Place in the World 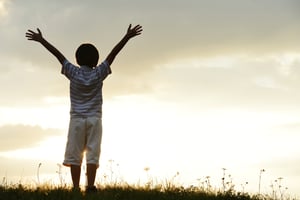 We parents are often tempted to idolize our children’s happiness. From the time they are born, we tolerate nothing that makes them cry—not hunger, not boredom, not loneliness. We react immediately to their cries with whatever remedy is necessary. Of course, it is our job to provide for their needs, and babies express those needs by crying; however, baby will eventually grow up. A baby who has never been allowed to experience a moment or two of unhappiness—probably more like inconvenience—can become an older child, then a teenager, then an adult who has no tolerance for anything that makes him unhappy or inconveniences him. Such a person is impossible to live with, for he acts as if he is sovereign of the world and tramples everyone around him to get what he wants.

Sometimes in the name of trying to be good parents, we dote over our children and spoil them by giving them everything they want. We love them, of course, and want to see them happy. The problem is that they sometimes come to see themselves as the most important people in the world and the happiness that comes from their getting what they want is short-lived indeed and not true happiness at all; in fact, they become miserable. Remember Veruca Salt from Charlie and the Chocolate Factory? Veruca got everything she ever wanted, but she was never satisfied, and so much so that she was miserable, as was everyone around her.

From a child’s earliest days a wise parent will teach him his place in the world. In Philippians 2:3, we are told to esteem others better than ourselves, or as the ESV renders it, “in humility count others more significant than yourselves.” Although most of us would agree it is a good idea to teach our children not to be selfish, teaching them to think of others as better or more significant than themselves goes beyond simply teaching against selfishness—it is teaching humility. In this passage Paul is teaching us to take up the same kind of humility that Christ had when he went to the cross for us. Your child’s place in the world as a child of God is to esteem others more significant than himself—to be like Jesus, really.

Keeping Philippians 2:3 in mind from the time a child is born is key to helping him learn to live that way by the time he is grown. You may be tempted by pop-psychology’s offers of “self-esteem” for your child, but remember, the Bible trumps psychology every time. And though the two may be in agreement on some things, anytime psychology stands in direct opposition to the Bible, God’s people should yield to God’s word.

Practically speaking, helping our children understand their place in a world that is much larger than they are and is full of people they should treat as more significant than themselves takes a lot of work and a lot of our resisting the temptation to immediately relieve our children’s unhappiness or inconvenience. As the original post suggested, we should start when they are young by not responding immediately to baby’s cry when we are in the middle of another important activity and know baby is not in danger. Early on, baby will realize he is not sovereign of the world, and he will also realize that Mom and Dad are more than his servants.

As baby becomes a walking, talking child, opportunities will abound for parents to help him understand his place. When he desires the toy of another child who is not willing to share or otherwise give it up, don’t try to appease his anger by offering him another toy; rather, let him experience the want and discover that he will not die from it. Help him count the other child more significant than himself. When the twelve year old wants to treat his younger siblings like his servants, it is time to engage him in some regular service to his neighbors or church members or others in the community. Nothing teaches a young man his place in the world like mowing a widow’s yard every other week for free or serving food at a local soup kitchen. After all, Jesus washed the unworthy disciples’ feet—that is the humility we are going for.

One of the best things we can do for our children is help them understand they are not the sovereigns of the world. The world simply does not revolve around them. It is a world that is much bigger than they are, but we can help them find their place in it. They are unique creations of God Almighty, made in His image and made to imitate Him by putting on Christ-likeness, right down to the humility Paul encourages us to put on in Philippians 2:3.