The Gift of Dirt: Let Them Get Dirty! 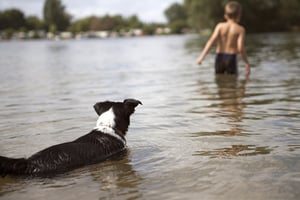 I grew up in the woods. As a boy, if I walked east from my house, I could travel about ten miles crossing one lonely old railroad track, several creeks, the Escambia River, and several thousand acres of forest before coming to another significant sign of civilization, and that was a 500 acre peanut field. I grew up in the woods.

I don’t claim to have had a perfect childhood, or even an imitable one for that matter, but what I had was nature—a lot of nature—and parents who weren’t afraid to let me explore it. My brother and I often left the house at daybreak and did not return until late afternoon or evening. Armed with bows and arrows, BB guns, and crackers and cheese we regularly set out with a half dozen hounds in search of adventure, preferably in the form of a dangerous serpent. Unfortunately, dangerous serpents often eluded us, but in our searching for them, we turned up an unimaginable wealth of riches in the form of bugs, butterflies, crayfish, lizards, weeds, flowers, sticks, leaves, poison ivy, and sometimes even enough fish for supper.

Fewer children than ever have the kind of opportunity to explore nature today that I had every day as a ten year old, but it is worth our time to contrive such adventures for them as often as possible. The natural world has so much to teach us about what kind of God our Creator is and what kind of Creator our God is. Beauty, order, organization, mystery, and miracle await those who are willing to get their hands dirty (and maybe their feet too) in pursuit of it. From tadpoles who live out that cycle of their lives in the deep muddy footprints of cattle, to ospreys struggling to gain altitude with slippery, shimmering mullet shaking violently in their talons, the circle of life is on display for all who will go afield to find it. There is more to it than that though.

Allowing, even encouraging our children to get dirty as they search for signs of their Creator God in the humus and mire and mud actually rewards and trains in them an intellectual curiosity that will serve them for all of life.

Not only do they learn that they can find what they are looking for, but they learn that they can find surprises they could never have imagined to look for, and that is a reward that sticks with a person and keeps him coming back again and again. Such curiosity and the regular reward of it feeds the imagination, sharpens the thirst for knowledge, and builds faith that answers are indeed around the next bend in the path under a pile of dead leaves stuffed into the end of a rotting log projecting out of an enormous beaver dam…but I digress.

Not only is there lasting educational value in allowing our children to get their hands dirty exploring creation, but there is also an aspect of character-building happening at the same time. A child’s getting dirty and realizing that it doesn’t hurt makes it more likely that he will not be squeamish about getting dirty in the future, and that makes it more likely he will not shun dirty work. In his “Raising Sturdy Kids” seminars, Christian psychologist Keith McCurdy often refers to the television program, Little House on the Prairie. He reminds parents that children who lived in the era depicted on that show were put to work at a very early age. Little girls killed and plucked chickens and churned butter for the family table. Little boys gathered and chopped wood and harnessed the plow mule. These are dirty jobs that, once tried and survived, built confidence and improved work ethic so children could tackle the next responsibility. It also confirmed that children had value as they contributed to the family sustenance.

Most well-educated people in America do not regularly perform any dirty work, and that certainly has some perks. Those who are willing to perform dirty work, however, bring a work ethic and a better understanding of the nature of work to their careers. A young lady who has learned to get sweaty mopping floors and scrubbing toilets is not only a young lady who will be well-equipped to care for a family, but is also a young lady who will make a better doctor, attorney, or governor because she knows what hard, dirty work is, and she is not afraid of it. A young man who is willing to get dirty and do dirty work is more likely to learn maintenance and repairs around the home, farm, or business that he can do on his own without calling an expensive repair service. His work ethic and understanding of work will make him better suited for any career he sets his mind on pursuing. Allowing children to participate in dirty, work that contributes to the family’s good at a young age helps them know they are an important part of the family and gives them a head start on developing a lasting work ethic.

We are a society that shuns getting dirty when it comes to our children.

McCurdy actually cites a study claiming our society has become over-protective because we have fewer children on average than we once did. Seems plausible. If you shelter and over-protect and coddle your children, consider getting them outside so they can get dirty. They will come near to God and better understand him as they explore his creation. They will also develop an intellectual curiosity that will benefit them all their days. Putting them to work on some really dirty project that they can actually accomplish and then enjoy the results of will help them become hard workers. It may take some getting used to, but once you see how your children grow from their experience getting dirty, I hope you will give them the gift of dirt over and over again.