The Gift of Hate: Teaching Children to Hate the Dark and Love the Light 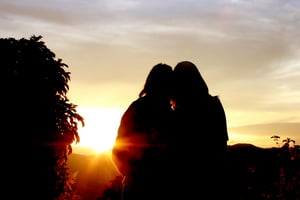 In this post-postmodern age in which we live, truth has become so relative that actual truth, real truth, true truth is hardly recognizable. Relative truth is a truth that is true for me but may not be true for you, or one that is true for me relative to the situation I am in—it may not even be true for me in a different situation. Relative truth is so dependent upon individual feelings, place, and time that we have to differentiate it from the actual objective truth somehow, as I did above by using the term true truth. This is bonkers, and it screams for a lecture on the importance of language, but that can be saved for another day. Just remember that whoever defines the terms controls the conversation.

At any rate, relative truth is trying to make nonsense of established conventions. Just two summers ago, for example, one of my minor son’s minor friends convinced an establishment to sell him an item with an alcohol ingredient in it because he told the server, “I identify as twenty-two.” Even though he had already told the server he was not yet twenty-one years old, the server disregarded that actual truth and yielded to the boy’s proposed version of the truth for no more compelling reason than he said he “identified” that way. The story is unfortunately not an extraordinary one, and while these classically-trained boys thought it was the grandest joke ever to use relative truth against those who hold it dear, the reality is that relative truth wants to drag the world towards chaos; it wants to call light, “dark” and dark, “light,” which is the equivalent of calling good, “evil” and evil, “good.”

In an age when relative truth seeks to drag the world towards chaos, it is perhaps more important than ever for Christians to stand firm for the truth and to teach our children to do the same.

In the last post I wrote that calling sin by name is important for our children because it helps them identify, define, and discuss their own sin on God’s terms. And that is most important for them as they learn to battle their own sin in the light of God’s word and by the help and power of His Holy Spirit. Learning to hate what God hates, sin, can only come to our children if we teach and train them in the truth and show them, without caveats, the contrast between the dark and the light.

While we should be keenly aware that God is love (I John 4:8) and that He loved us while we were still sinners (Rom 5:8), we must also be obedient when He calls us to hate evil (Ps 97:10; Prov 8:13). In this age dominated by relative truth, our children will hear what a wonderful choice abortion is. They will hear how progressive it is for two people of the same sex to enter into some pseudo form of holy matrimony. They will hear that sex is an act no more sacred than a hand shake. They will hear that adultery is acceptable if you have fallen out of love with your spouse. They will see that it is normal to steal from your employer when you feel he or she does not pay you well enough or when he or she is a faceless corporation. They will be shown it is okay to oppress those you do not find beautiful or even normal. They will be pounded with the idea that there is no God at the same time they are being pummeled with the notion that all religions are really worshipping the same god. And through all of this, you must be clear in your declaration of the singular truth that God has called his people to light, to life, to a way of being fully human, a way that He describes for us in His holy word, no matter how the world may deride it. Through all of this relative truth and darkness and chaos, you must be clear with your children as you distinguish dark from light, teaching them to hate the dark and love the light because that is what our God has called us to do in spite of the claims of the world.

This distinction between what God loves and what he hates—light and dark, truth and lie, good and evil—is one of the elements that establishes order in the world, rescuing us from the chaos that presides when each person does what is right in his own eyes (Judges 17:6; 21:25). When the world embraces relative truth and passes off darkness as light, children, especially, become confused; they lose the distinction between good and evil and therefore become blind to God’s order in the world. Suddenly, all is light, and there is no dark. But it is not only the world outside the Church that is guilty of blurring or even erasing the lines. Christians, too, have to be careful here because our job is to go make disciples, which means we must go and preach the Gospel to those who may be clinging to darkness. One mark of those who have turned to the light, been converted, have come to a saving knowledge of Christ, and to faith in His work of redemption is that they repent and confess their sins, not only at their conversion but continually thereafter because part of making them disciples is teaching them to observe all that Christ has commanded. Where Christians ignore this mark of conversion and number the unrepentant among the redeemed, we contribute to the chaos. Wrong seems to melt before our very eyes then, and each one does what is right in his own eyes because no one can distinguish between evil and good, dark and light—especially children.

We simply must teach our children that which God calls evil.

We must teach them to call it by its name and to hate it as He hates it. Making that distinction for them between good and evil helps them understand God more clearly, helps them understand their need for Jesus and the victory He has won for us. A child who does not know the dark, its nature and power of destruction, will have no regard for the light because he will be blind to it. All will be as light to him. And when this is the case, he will be as hopelessly dark and as utterly lost as those described in John 1:5: “And the light shines in the darkness, and the darkness did not comprehend it.”

Where there is no darkness, no evil, no sin, there is no need for a Savior. Where Christians neglect to talk about what God hates alongside what He loves, they lose the contrast between dark and light, evil and good, sin and righteousness—they make the Gospel of no consequence. In order for the world to recognize its need for a Savior it needs to know the truth—not the relative truth.