The Unfulfilled Promise of Technology in Education 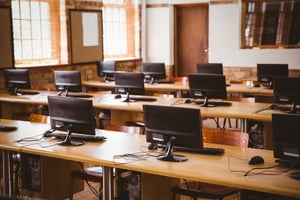 Parents who send their children to classical schools often have to defend that decision to their siblings, their friends, and even their own parents. The conversations can be tense, and especially so if everyone involved received a free public education. It isn’t as though your friends and relations know a lot about education; it is more likely their opinions have been informed by public debate, federal initiatives, and the latest trends. If the parents defending classical are sacrificing financially to afford the education, they often find themselves doubly on the defense. Points of debate include uniforms, classroom rigor, Latin, and always, always classical education’s lack of emphasis on STEM.

Classical school boards, administrators, and educators are frequently engaged in these same sorts of conversations and have also been frequently on the defense about STEM. We are seen as the experts when it comes to classical education, so we work hard to stay informed about education issues. Regarding the issue of STEM emphasis, we’ve run across some recent research that may make you more comfortable and confident with the lack of technology in the classical classroom—and better equipped to respond to your brother-in-law. The science and math scores at classical schools speak for themselves as they far exceed the national averages, but technology has not had such a yardstick by which to calculate its effectiveness (or lack of) until now.

Jared Woodard published a well written and researched article in the journal American Affairs, Fall 2019, Volume III, Number 3. The title is “Rotten STEM: How Technology Corrupts Education.” The article is well worth the twenty or so minutes it takes to read, but in case you don’t have twenty minutes to spare, here are a few highlights. All quotes, references, and statistics are directly from the article, which is well-footnoted.

Mr. Woodard begins with the price tag: “The US education system spent more than $26 billion on technology in 2018.” What that insane amount of money purchased is nearly as many computers as there are students; also e-book readers, tablets, and scads of software that were supposed to turn learning into a game. Unfortunately, though, the technology doesn’t seem to be helping students learn. Woodard goes so far as to claim that

“The use of technology in schools actually lowers test scores in reading, math, and science, damages long-term memory, and induces addiction. Both advanced hardware and the latest software have proven counterproductive. The only app or device found to meaningfully improve results with any consistency is an overhead projector in the hands of a competent human teacher.”

A claim like that could get a person tarred-and-feathered in the education world, unless the claim can be backed up, and Woodard backs it up.

Results from the 540,000 students recently tested with the Programme for International Student Assessment showed that “classroom usage of all of the most advanced equipment was associated with worse student performance on every type of exam” (emphasis mine). Scores in math, reading, and science were double-digit percentage points worse for students who used e-book readers and tablets than for students who did not. The results were only slightly less bad for those using laptop or desktop computers.

And why do the scores suffer so?

One reason is memory. Woodard says, “The use of devices in class is also linked to impaired long-term memory. In one study, the final exam scores of students whose class permitted electronic devices were 5 percentage points lower than those whose classes did not.” Classical educators are not surprised because they know that handwriting is tied to memory and cognition. When handwriting is replaced by key-tapping, especially when that key-tapping is for note-taking in class, recall is always impaired.

So much for the hardware. One should ask if the results are any better for software. They are not. The big push in recent years has been for software that makes “computer-assisted instruction” (CAI) possible. Woodard says the money, extra time on task, and extra classroom instruction used to push this CAI software initiative should have produced positive results without any help from the software. The results were mixed at best, though. Woodard says, “A broad study of sixteen dif­ferent software products found that, after one year, students using the software did not have test scores that were statistically significantly better than students who did not, and some had significantly lower math scores after a second year.”

“Gamification” of learning is another facet of the CAI initiative, the idea being that if learning is all fun and games, children will be attracted to it and can do it without a teacher. That just hasn’t proven true so far though. Woodard says in one recent test

“more than five hundred students were assigned either to an ordinary module teaching how to divide fractions or to a module teaching the same topic using a basketball game-like computer program. Students assigned to the basketball game spent about five minutes longer on the lesson, but performed significantly worse than students following the regular method. Ultimately, tech that boosted student engagement just took a longer time to teach them less.”

Classical educators have long argued that learning is actually hard work, and that we will have better outcomes if we teach our students the value of hard work than if we try to trick them by turning learning into a game.

Technology is a tremendous tool, but in spite of all its promises it still is not a means to the best education, and it is certainly no fit end of education. Its absence from classical classrooms is not only defensible, but perhaps finally laudable. Ultimately, classical education is about human engagement, not only engagement with the humans in the room at any given moment, but also engagement with humans who have lived real lives and died real deaths over thousands of years. Philosophers, theologians, mathematicians, scientists, farmers, poets, kings, and warriors, from beyond the grave they speak truth to us for better or worse. Classical students learn truth from the living and the dead and so learn to communicate face-to-face with humans around them, and they flourish as humans because of it.