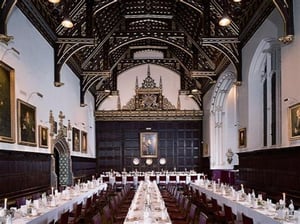 In our weekly email to parents last Friday, we embedded a video of Dr. George Grant telling the story of replacing the oak beams in the dining hall of Saint Mary’s College, Oxford. That story was part of the first talk I ever heard Grant give some fifteen or so years ago. It is a powerful example of the kind of foresight Christian people should exercise all the time in all facets of life.

In spite of the amount of class time we use covering history and poking around in dusty old books—looking backwards you might say—I think classical Christian education is a forward-looking venture. Our desire is to graduate students who will be for humanity what the builders of Saint Mary’s College were for their descendants. I believe the graduates of classical Christian education will become the stabilizing forces in the church, the family, and the state.

It seems many of us evangelicals carry on as if we invented Christianity in America in the ‘50s. Our churches need the kind of parishioners who understand their faith from a historical perspective so they can present it in the proper context to the next generation. Furthermore, there is something in itself stabilizing about knowing your history. Students who learn the story of their faith well now will become the next generation of churchmen, the ones who will see the church into the next century if the Lord tarries that long. They will teach their children and their children’s children how to worship well. We need this way of passing down for our churches, not young adults leaving the faith. Classical Christian education is helping here by supporting the family and church in passing on the whole faith, history included.

The family unit is in shambles in this country. The number of children born out of wedlock in 2016 was up to about 40% according to numbers published by the CDC. In 1950 only 4% of all babies in the U.S. were born out of wedlock. Forget 500 years. Where does that trajectory put us in fifty years? I don’t pretend to think there is a simple answer to this issue or that this issue is even the main problem; really, it is only a symptom of a bigger problem. What I know is that when Christian people give their children a thorough Christian education that helps form in them a solid understanding of their faith and of the kind of people God created them to be, there is a far greater chance they will try to live God-honoring lives. Classical Christian education labors to graduate young men and women who know their roles in the family and know the family’s role in God’s kingdom.

What can I say about the state? It is a good thing Christendom does not have to look to the government to save us! God has ordained human governments to rule over mankind, however, so Christian people ought to be about the business of filling roles in those governments. Graduates of classical Christian education are uniquely qualified to pursue such roles even though not all will be gifted or otherwise suited for it. Students who learn their history, literature, and theology will be head and shoulders above those who didn’t; furthermore, our students who are proficient in Latin, rhetoric, and logic will be prepared to communicate their ideas. It may seem like our government is lost and our constitution is in danger of falling, but I think a generation of classically educated Christians can salvage the future. Think of them as oaks in waiting.

It is not too late for Christendom to do what we were called to do on this earth. But like the builders of Saint Mary’s College, we have to build now and at the same time think ahead—far, far ahead.