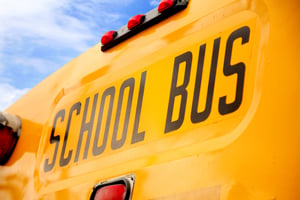 Being in the Christian education business, one of the things I hear often from Christian parents is, We send our children to non-Christian schools so they can be salt and light to the lost children and teachers. Yikes! I want to suggest to those parents that they’re asking something nearly impossible of their young ones. In fact, if your Christian children are in a secular school, here are three reasons to get them out of there before they lose their faith.

Before I get started, let me make one thing clear, I fully believe that every Christian must be engaged in Christ’s Great Commission to His followers found in Matthew 28:19: “Go therefore and make disciples of all the nations, baptizing them in the name of the Father and of the Son and of the Holy Spirit, teaching them to observe all things that I have commanded you; and lo, I am with you always, even to the end of the age.” That is a command we must obey. But does obedience from a six year old manifest itself the same way as obedience from a twenty-six year old? Does obedience to that command look the same from a brand new Christian as from a more mature Christian? Of course not. Where do our school-aged children fit into that commission? Does Christ want us to send our young, (mostly) spiritually defenseless children alone into the lair of the enemy in an attempt to convert them?

I want to suggest that the answer to that last question is almost always a resounding, no. Of course we want our children walking in faith and learning how to bear witness to the Gospel, but do we really think our nine-year-old is spiritually strong enough, prepared enough, mature enough to have more of an impact on his unbelieving schoolmates than five, ten, or more of them will have on him? Again, I think the answer is most often, no. And the reason is that the concrete isn’t dry. Our Christian children aren’t nearly the mature Christians they will be someday after much nurturing and mentoring. You don’t send the Pop Warner Champs to play the Super Bowl Champs; similarly, you don’t send your eight year old Christian kid to convert a public school that has the force of the federal government behind its secularism. Yes, God often uses foolish things to school the worldly wise, but are you sure your child is the foolish thing He will use to thwart the effects of secular education, even in one of his classmates? We can be faithful without testing God.

The Proverbs caution repeatedly against aligning ourselves with certain kinds of companions—from the foolish to the guy with a bad temper (both frequent behaviors of the non-believer)—and then warn us that bad company corrupts good morals. Some may argue that these proverbs are not actually commands, but we can agree that at the very least they are wisdom for the believer, and they seem to be saying that it isn’t wise to spend too much time with people who serve other gods, especially if they outnumber you. And that goes double for the nine-year-old who, by the simple fact of his age and lack of experience, does not possess the discernment and wisdom necessary not just to defend himself but to go on the offense with the Gospel.

Of course, every child in a secular school is not anti-Christ and, in fact, it would be foolish to think your child would not find a couple good Christian friends to help sustain him. Certainly there are some good Christian teachers in secular schools as well (and they definitely have a more valid salt and light argument for being there than your child does). Unfortunately for your child, though, a couple of like-minded friends and an undercover Christian teacher usually isn’t enough community to protect against the secular attack on Christian presuppositions and ideals even when it is not attacking Christianity directly by name. In other words, it isn’t simply that there are a few predators in this pond you’ve let your little Christian minnow loose in; it is that the whole pond is toxic to your minnow, and he is going to bring more toxic waste home with him each night than you can possibly wipe off of him before he goes back for another seven hours tomorrow.

The Barna Group, known for its work compiling a variety of Christian statistics, reported in the early 2000s, that 59% of young Christians leave the church permanently or for an extended period of time. This study was not related to Christian education, but one should ask himself how many of those students were getting one unified message from home and church while the school—the third influence in a child’s life and the one that spends the most instructive time with the child—was teaching and training a message radically different from home and church, a message toxic to Christianity.