Where Have All the Graduates Gone? 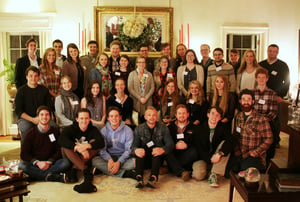 Do you ever wonder where all the Trinitas graduates go after graduation night? Most of them eventually trickle back to campus for a visit; in fact, many of them visit often. A few alumni, though, have moved on so fast and so far that they haven’t stopped even once to visit since the day they left. This past summer James Cowart spent a lot of time catching up with as many of the ninety-four Trinitas alumni as possible, and we’ve taken several opportunities to share his findings with you in this space. This week, I want to leave you with some idea about where all the Trinitas alumni have gone.

As it turns out, 60% of Trinitas alumni responding to our survey have gone to secular colleges and universities after graduating with a Trinitas diploma. Some of them have attended state schools like Alabama, Auburn, Florida, Florida State, Mississippi, Mississippi State, Nebraska, and other solid state schools. Others, however, have gone to private secular institutions such as Emory, St, John’s, Rice, and Washington and Lee—schools with acceptance rates in the 10% range, meaning they accept only the best students.

Secular schools aren’t for everyone though. A student unsure of his or her walk with the Lord, or maybe even just immature in his or her walk, shouldn’t attend a secular school. But for students who are ready for environments that will challenge their faith, a classical education will often give them the edge they need to get accepted into even highly selective secular schools. What is more important than getting into those schools, though, is maintaining a healthy Christian faith once there. About 90% of Trinitas alumni report maintaining a healthy faith (as indicated by their being active in their local church), and that includes those who attended secular colleges and universities. Still, not every Trinitas alumnus is ready for such an environment. Parents and students should make these decisions very carefully, and the spiritual maturity of the student should be the deciding factor.

The other 40% of respondents to our alumni survey have attended Christian colleges and universities such as Liberty, Lipscomb, New Saint Andrews, Samford, The King’s College, Union, and Wheaton. These aren’t just schools for people who didn’t think they were ready to have their faith challenged, though. Many of them are selective schools that are academically rigorous, competing with secular schools for placing their alumni in prestigious graduate programs and top jobs after earning undergraduate degrees. In fact, several of our alumni, about 15%, have gone to both Christian and secular schools for their undergrad and then grad work.

This is a lot of talk about college for a school that claims not to be a college prep school, so I want to continue the conversation and, after a bit, turn it away from college and toward just what education really is and what it does for the formation of humans. Next week, I’ll report on what our alumni are studying in college—spoiler alert: there are some surprises. After that, I’ll talk about why our alumni find themselves prepared to study anything they encounter. That, I think, will be the conversation that really gets to the heart of what classical education is and does. Until then, remember what G.K. Chesterton said: “Education is not a subject, nor does it deal in subjects. It is instead a transfer of a way of life.”