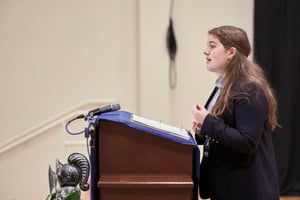 Recently I proposed that the classical school movement is seeking to preserve the heritage of western civilization, in part, by teaching and training good oratory skills. I also explained some of the ways Trinitas begins this teaching and training as early as kindergarten. If the beginning is, as I mentioned last week, as simple as teaching five-year-olds good eye contact and clear enunciation, then the end of that training is guiding eighteen-year-olds through the writing, presentation, and defense of a senior thesis. There are, of course, many, many varied components between those two stages but perhaps none as important and exciting as the John Chrysostom Oratory Competition. 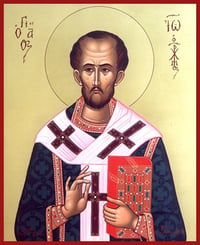 John Chrysostom (c. 349-407AD) was an early church father who was and is well known for his writings, but most especially for his preaching. In fact, his name (Chrysostomos in the Greek) means “golden mouth.” The Association of Classical Christian Schools conducts a speech competition each year named for Chrysostom; it is open to juniors and seniors of ACCS accredited schools. Trinitas has finished second in the national competition three different times since becoming ACCS accredited, and we are excited about our chances of winning this year.

The contest is judged according to a strict rubric to determine the winners. In the Chrysostom contest, speakers are judged for the soundness and organization of their arguments, their choice of language and syntax to construe the desired meaning, their ability to establish competence or ethos with the audience, and their appropriate appeal to emotion. Additionally, there are six major parts to a speech that will be assessed individually and as part of the whole. Finally, the speakers are judged on the things that are easier for us all to see: familiarity with the material, clear meaning, language that pleases and inspires the audience, enunciation and volume, tone and pacing, and bodily gestures and positioning.

We begin training for this contest in seventh grade even though students are not eligible to move on to the national competition until their junior year. We don’t do this only in hope of winning the competition. We do it because Chrysostom speeches are based on a fairly common classical formula for essays, speeches, and the like. We do it because it is part of that training in rhetoric I have been writing to you about; and not just the speaking part, but the writing that precedes the speaking—that is rhetoric too. We do it because it is good practice for students to form an idea and the arguments that support it, and then try to persuade their classmates to see things their way. This sort of persuasive writing and speaking is not only part of our western heritage, but teaching it is also part of fulfilling the Trinitas Vision. We want Trinitas graduates to “reason persuasively and articulate precisely” and to “dissuade those who are stumbling towards destruction”—that is a high calling for eighteen-year-olds in today’s West, but it is one that many Trinitas graduates can answer.