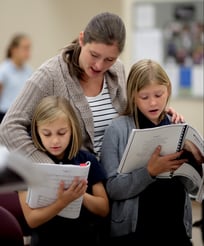 At other times I have written here about the importance of the home, church, and school being in agreement, and it is a message that bears repeating. Those three entities have the most influence over a child’s formation. If the home, church, and school have different messages about who God is or who His people are or how they are called to live, a child’s mind will be divided on issues that are foundational to her existence. For a child to flourish spiritually and emotionally, hearing a consistent message from home, church, and school is necessary. By that same standard, a classical education cannot take root and flourish in the life of a child if it isn’t being supported at home.

Often parents enroll their students in classical schools, not for the classical education, but because they are attracted to the culture of the school when they visit: children seem happy, polite, articulate, and mature; teachers don’t seem frazzled; the décor looks less like a school and more like an art gallery or cathedral; and the list goes on. Ironically, (or maybe not) these are sometimes the same parents who, two years into their classical experience, get frustrated with the study of Latin and Greek or the reading of so many old books or the absence of STEM.

Is there a bait and switch going on in classical education, these parents may wonder? No. What they do not realize is that it was the classical education that created the culture they were attracted to at the beginning. Someone will say, No, it is the Christian aspect of the school that creates the culture. Well, of course, that is part of it. A Christian classical school will turn out committed Christians while the non-Christian classical school will turn out what C.S. Lewis calls “clever devils.” But they will be clever devils who are polite, mature, articulate, winsome, and all the other characteristics that attracted the parents in my example to the classical Christian school in the beginning.

David Hicks in Norms and Nobility, his treatise on education, asserted that the end of a good education should not only be right thinking but even righteous acting. And that is what classical Christian education done well at school and at home is able to produce. Prospective parents who are attracted to the culture of classical Christian schools are being attracted by the fruit of classical Christian education. But fruit does not come easily, friends. Trees that are not nourished produce no fruit—perhaps even worse, trees that are nourished only part-time produce little or no fruit, or perhaps even bitter fruit.

Parents who lose patience with the curricula of classical schools, who grow to despise the time spent on art and music and Latin and theology, are despising the very nurture that produced the fruit that attracted them to classical Christian education in the first place. To get the fruit of classical Christian education, the home and school must work together. This idea may seem foreign to parents who themselves have had no classical education, but take heart, many have done it before you. It is possible.

I want to suggest a few do’s and don’ts for parents who are attracted to the beautiful culture classical education can produce but who may not understand how to support it at home:

The culture that attracts so many parents to classical Christian schools is not a warm and fuzzy fluke, nor is it an accident of a bunch of nearly perfect people coming to the same school by chance. It is the result of classical Christian education. It is not only right thinking but also righteous acting. And it can be yours, but it is going to take a little work. I hope you will join us.