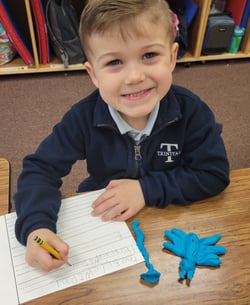 What parent wouldn’t want the best education for their child? To help make that decision, parents need information about the educational options available to them. If you aren’t comfortable with the status quo or want to give your children a better education than the one you received, maybe it’s time to consider a distinctly different kind of education.

First, Trinitas is classical in its pedagogy.

When we say “pedagogy,” we mean methodology. We embrace and employ a 2,000-year-old method of teaching that was perfected in the middle ages and later used to educate the learned men who founded our nation. This method, known as the Trivium, was the standard of education for the west until the late nineteenth century. More than teaching children reading, writing, and arithmetic, the Trivium trains students how to learn. In the Trivium, we are equipping students with the “tools of learning” through the three stages, grammar, logic, and rhetoric.

In the grammar stage, from kindergarten until about the sixth grade, children gain knowledge by memorizing facts. They learn the books of the Bible along with the precepts, commands, characters, and stories found in Scripture. They memorize such things as sums and measurements so that they do not have to pause or use their fingers to determine that eight plus nine makes seventeen or that there are four quarts in a gallon. They learn names and dates and facts from history; in fact, they memorize a historical timeline, from Adam to today that creates for them a chronological framework in which to place all future knowledge. And why all this memorizing, the post-modern educator would most certainly ask? Because these are the years when children are naturally inclined to memorizing and learning by chanting, singing, and rhyming. So it is in these years that we dedicate ourselves earnestly to learning Latin grammar.

Again the post-modern educator would be puzzled and ask, “Why teach a dead language?” The benefits are more numerous than we have time to expound here, but check out our other blog posts about Latin for an impassioned explanation. Suffice it, for now, to say that no other subject material teaches organized and precise thought as does the study of this inflected language that is frozen in time. Remember, our goal here is much bigger than just teaching our students to order a meal in a foreign language. We are teaching them how to learn and think. We are equipping them with the tools of learning.

In the logic stage, from grades seven through nine, students learn formal logic. Children at this age are naturally inclined to question and argue, so we teach them how to do it properly. Anyone doubting the need for training in logic needs only turn on the television or read the newspaper to be convinced. We continue, of course, to teach math and Bible and history as well as other subjects in the logic stage. But now students want more than facts, and they begin to discover that the facts they’ve learned have ordered relationships. They begin to see that sums can become parts of equations and can be represented on a plane. They begin to see the Bible as God’s true story in which He has been preparing His people for redemption for all of time. And they begin to understand how an event such as the Reformation could have led to the colonizing of America. In this logic stage, then, knowledge gained in the grammar years gives birth to understanding.

In the rhetoric stage, from tenth to twelfth grade, students become poetic and desire to express themselves. Few things are harder to endure than a seventeen year old given to self-expression who has no idea how to go about it. So in this stage we teach formal rhetoric. Here students learn to craft persuasive arguments that are not only effective but also beautiful. The knowledge and understanding gained in the grammar and logic stages becomes wisdom in the heart of a student who is taught to evaluate sources from literature and history; discern truth, beauty, and goodness from error; and then express conclusions persuasively and beautifully.

This method of teaching, this Trivium, goes with the grain of children rather than against it, going along with their natural bents and inclinations at given ages to take advantage of how God has created them. The Trivium equips children with the basic tools of learning that will allow them to learn any subject later. They become life-long learners. Students begin to find, as they tackle new subjects, that every subject has its own grammar, logic, and rhetoric—that is, each subject they face in life, from history to lawn mowing, has a basic language for talking about the subject, ordered relationships of particulars within the subject, and a way of discoursing in the subject that expresses discovered truth beautifully. We often compare the Trivium to a tool chest. In the grammar stage, students memorize the names of different tools and their uses. In the logic stage, they learn how to use each tool effectively and in combination with other tools. In the rhetoric stage, students begin to use all of the tools to construct beautiful projects.

By contrast, students in the government schools often find themselves stuck in what we would call the grammar stage well into their college years, being asked only to learn the basic facts in subjects. Or, to the other extreme, seven and eight-year-olds are sometimes asked to analyze a piece of literature and then express their feelings about it—a task better suited for college students. Sadly enough, most Christian schools simply adopt these same government school methods of teaching and slap a Bible verse on them. Our classical method of teaching, then, our Trivium, makes Trinitas not just different, but distinctly different.