How to Avoid a Culture of Disrespect (and other shameful maladies) 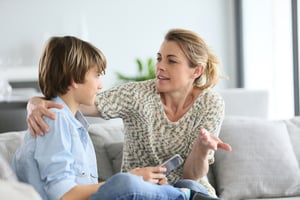 I am in a position to observe far too much friend-parenting going on among us today, which means children are being left to themselves—treated like friends instead of like children. Too often I hear parents handing over to their young children decisions that children are not capable of making. For example, more than once I have had parents of a third grade or younger child in my office asking the child where he or she would like to go to school. It is always a painful exchange for me to hear and watch, and I am never surprised by how it ends: in a hung jury. The child doesn’t know what he wants from a school—he doesn’t have all the facts or the ability to discern among the facts if he had them—and the parents refuse to deprive the child of making the decision because they want to empower him. Unfortunately, because a child that age is not able to make such a decision, the problem is not one of empowerment, but one of leaving a child to himself, one of treating the child like a friend when what he really needs is to be treated like a child by a parent who is faithfully trying to be a good parent.

While Christian parents may be the only parents with the advantage of the indwelling Holy Spirit to help them understand God’s word, plenty of parents have been given the common grace to see the parenting problem that is facing our culture right now. One author (who may or may not be Christian) has written a couple of short pieces that may prove helpful to parents trying to navigate these waters. One addresses the culture of disrespect created when parents treat their children like friends, and the other talks a little more specifically about the effects on society when parents abdicate authority. Both of the articles rely somewhat heavily upon Dr. Leonard Sax, with whom I am unfamiliar, but who has gained popularity recently in some Christian circles as someone who is at least showing some common sense when addressing parents on these issues. The articles are informative, and Sax looks like someone worth learning more about.

At the end of all the talking and article browsing and book reading, the truth is still the truth. God blesses us with children and then tells us to train them up in the way they should go.

The children He tells to honor their parents, to obey their parents. He doesn’t do it the other way around for good reason. Young children must be taught what to think, what to say, and how to act—parents can and must do that. As children grow older, of course, we teach them how to think for themselves and slowly remove rules until someday they become people we can be something like friends with. Until then, however, we are to be for them the people we want them to be become—we model it for them, mold them into it, shape them. To thrust too much freedom, decision making ability, and responsibility on them too soon is to get the cart ahead of the horse. We are not to leave them to figure things out for themselves in their own way, for if we do, they will surely do things in a way that brings shame to their mothers, at least, that’s what the Bible says.