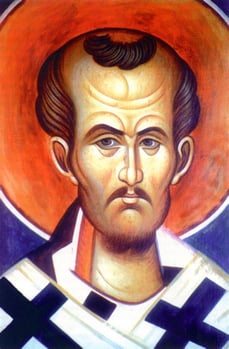 St. John Chrysostom, Archbishop of Constantinople, was a fourth-century Church father known for his powerful and eloquent preaching and public speaking. It was his skill in oratory that earned him the name, “Chrysostomos,” or “Golden-mouthed.” And just as gold is both precious and weighty, Chrysostom’s words were not only beautiful, but always employed in the pastoral service of salvation and social justice.

Our annual speech competition bears Chrysostom’s name not only because of his renowned eloquence, but also because of the great pastoral concern he had for Christians of his own age as they battled and sometimes succumbed to the worldly influences of pagan culture. His remarks about his parishioners’ preoccupation with gladiatorial games and chariot races strike uncomfortably close to home:

“If you ask [Christians] who is Amos or Obadiah, how many apostles there were or prophets, they stand mute; but if you ask them about the horses or drivers, they answer with more solemnity than sophists or rhetors."

When our favorite team’s batting order is readier on our tongue than the plot of Deuteronomy or the parables of our Lord, Chrysostom’s enduring value and relevance are hard to ignore. In giving our students the opportunity to participate in the Chrysostom Oratory Competition, we invite them to fill their minds with worthy thoughts and their mouths with winsome words—weighty words that will not return void.