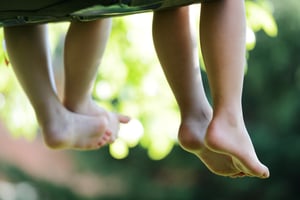 Parents are in the business of working themselves out of a job. Think about it: from early in a child’s life, the role of parents is to prepare children to be independent. We train them to eat, use the restroom, brush their teeth, dress themselves, read and write, say please and thank you, and lots of other things before they ever lose their first tooth. It doesn’t stop there, of course. By the time they’re teenagers we’re making sure they can get themselves out of bed and to school or work on time, drive themselves around, make all the right friends, take the classes that lead them to the best colleges and then on to the best careers. All these things we do because we know they’ll be on their own soon, and we won’t be there to tell them what to do.

But what about their faith? What about their spiritual condition? We want our children to take up their crosses and follow Jesus. As parents, how are we preparing them for that? All too often we are dependent upon the church alone to prepare our children spiritually; or if our children attend a Christian school, we feel as if we have doubled-down on the spiritual issue. Unfortunately though, even children raised in the church and in Christian schools leave the faith in heartbreaking numbers once they get out on their own. This research was first reported by the Barna Group and has become common knowledge in the Christian world during the last decade.

One reason young adults leave the faith is that they have not seen a complete picture of Christianity that fits the world they live in. If the child attends church faithfully and attends a Christian school, he is likely ahead of the game and getting a fairly consistent message from two of the three most important influences in his life. Still, what happens at home carries the day. It is easy for us as parents to think, “I have him in church every time the doors are open. What more can I do?” The answer is, a lot!

Remember how long it took to potty train Junior? how long it took to teach him to ride a bike, read a book, throw a baseball? Anything worth learning takes teaching, training, and lots of practice. Faith is the same way. Parents cannot, of course, be the Holy Spirit in a child’s life. God does the saving, not Dad and Mom, but a child of God needs to learn how to practice his faith in everyday living. He needs to learn to pray, study God’s word, and apply biblical principles to his every day decisions. If this doesn’t happen at home, Junior’s faith may not make it in the real world. He couldn’t go to school until he was potty trained, and he can’t take up his cross and carry it into the real world until his faith is strong enough to stand on its own.

In 1 Corinthians 3:2, Paul tells the church at Corinth that when he first came to them he fed them with “milk, not solid food, for [they] were not ready for it.” He was referring to teaching them Scripture and the daily practice of their Christian faith. He started them at the beginning as is appropriate, teaching them just what they were able to understand. Unfortunately, when he wrote to them much later, he found them still in the same spiritual condition and said, “even now you are not ready.” He wanted them to be maturing in the faith, but they had not put the work in and were thus easily led astray because of their spiritual immaturity. They were still drinking milk like babies when they should have already been eating meat like adults. They were like modern young people who leave the church when they get out of Dad and Mom’s house.

Parents must work hard to help their children mature spiritually. It will not happen on its own anymore than a child left to himself with no guidance will potty train himself or teach himself to read. As parents, we must see to it that our children are secure in the faith and walking close to God before they go out on their own—eating meat, not stuck on milk. This is the work God has given us to do as parents. It is the most important work we have, and even though the church and the Christian school support us in it, the work is ours (Deut 6:6-9).