Seek First the Kingdom of God 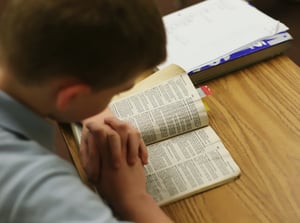 We should all be familiar with Jesus’ exhortation in Matthew chapter 6 to seek the kingdom of God rather than chase after the things we think we need. He doesn’t say we should forget about the things we think we need—food, clothes, the important stuff—but that those things will be added to us if we will seek first the kingdom of God. The idea seems to be that seeking after food and clothing (and fill in the blank) is something akin to getting so blinded by individual trees that we become unable to see the forest. Or worse: Jesus seems to be cautioning us against a form of idolatry, against letting our material needs (and wants) take the place of God as the focus of our worship and devotion.

A common form of this idolatry at school for the student and the teacher is grades. Both groups can get so caught up worrying about the test and how it will affect grades that they forget the goal is to learn and that learning comes to those who give their best effort. Just as Jesus did not say that food and clothing weren’t necessary, neither will I say that grades aren’t necessary on some level to get along with the rest of the world. Neither will I say grades are unimportant or that they don’t matter. But I will say that grades are secondary. What is primary is to go after learning with all the tools God gives you, to do it heartily as unto the Lord. When teachers encourage students to make this their primary focus and when students buy in, the learning comes and the grades follow. That doesn’t mean everyone makes an A, but everyone makes what he or she is capable of.

Recently our Mr. Hughes gave a speech at the Trinitas National Honor Society Induction Ceremony. He didn’t use this text from Matthew 6, but he spoke along the same lines about money that Jesus spoke about food and clothing and I just wrote about grades. His premise was that being “smart” is often equated with the idea that you will make lots of money someday. He gets around to saying that what smart people actually do is the thing they set their minds to—which could certainly be making lots of money. Just like people with great athletic ability and people who are born beautiful, smart people have been given their gifts by God for a reason. The only way to really meet God-given potential is not to set your mind to making a wad of cash, but to “seek first the kingdom of God” and everything meant for you will be added to you—everything God intended for you to do and to have will be yours for the good of His Kingdom. But don’t take my word for it. Mr. Hughes says it far better than I, and you can hear his speech in its entirety here.