Three Reasons You Should Observe Advent with Your Children 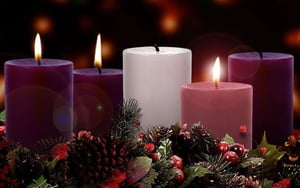 In spite of Christmas displays in the stores in October and continuous Christmas music on the radio since the day after Thanksgiving, it isn’t Christmastime yet. According to the historical calendar of the Christian Church, we are currently in the season of Advent. Taken from the Latin, adventus, meaning coming or arrival, Advent is the season leading up to Christmas that is symbolic of the world’s longing and waiting for the promised Messiah of God who would take away the sins of the world. Though it is often unobserved in Evangelical circles today, I want to offer just three reasons why we should consider observing Advent with our children.

#1 Teach the Importance of Christ’s Coming

We know, of course, that Christ has already come, and because of that, every day is like Christmas and Easter all rolled into one. We can and should rejoice and feast and be thankful. But there was a time when the world was sin-dark and anticipating its Deliverer. That age is one worth teaching our children about, and it is symbolized by the season of Advent. Why should we teach our children about a Christless age? So they can better appreciate the fact that the Savior has come for them. There is no easier route to taking the Savior for granted than that route paved with the stones of ignorance about our need for Him. Advent offers us an important opportunity to reinforce our and our children’s need for the Messiah. In the words of Jerry Bridges, author of The Pursuit of Holiness and The Discipline of Grace, we should “preach the Gospel to ourselves daily,” and the importance of the Gospel begins with our understanding that we need it.

#2 Pushback against Secular Usurpers of the Calendar

Anyone who frequents big department stores knows that many of them were already establishing Christmas displays even before the arrival of their second biggest shopping holiday, Halloween. Lest you think this early display of holiday cheer just means those corporations were overcome with the Christmas spirit early this year, let me assure you it’s all about the money. The merchandisers have hijacked the calendar for one reason: profit. Western culture and tradition, importantly shaped by Christianity over millennia, has been wrested from us by those who worship the dollar. There is nothing sacred about Black Friday or Cyber Monday. The Western calendar, indeed our entire Western culture, is more shaped by economic influences now than by holy ones. Bah-humbug, I say. Christians should stop dancing to that tune and push back against those secular influences. What’s at stake? Oh, nothing more important than a Christian way of being. Observing Advent is one way of showing our children that holy matters take precedence over secular economic ones.

Western society was largely built on Christian culture but now is bankrupt. We have spent the last couple hundred years living on the Christian capital that was invested into Western society earlier in history, but Christian reinvestment during that couple hundred years has been too small and too late. It is time for Christians to re-establish a distinctly rich Christian culture that will once again permeate all Western society, even the whole world. I say re-establish, not re-create. The historical practices and disciplines of the church are rich and meaningful and worthy of our attention. The church has often, at least in the last hundred years or so, compromised on its culture under the guise of appealing to unbelievers or seekers. The result has been a watering down of historical Christian culture to make it look less different from secular culture. But we are different. God has made us different by the blood of Christ and has called us into a different culture. Re-establishing the historical practices and traditions of the church is the very thing that will demonstrate we are in the world but not of the world, for if we are of the world and look the part, what’s the point? Observing Advent is one small but important way for us to demonstrate to our children that we do indeed march to the beat of a different Drummer—one small but important way to begin re-establishing a distinctly Christian culture in the world.

Give your children a legacy of faith, and in that giving give them rich and meaningful ways of being Christian that demonstrate they are part of something bigger than themselves, part of something that transcends time and space, uniting them to that great cloud of witnesses that has gone before them in this faith. Observing Advent with your children is one small way of doing that. It is one small way of preparing their hearts for the miracle of Christmas while redeeming a distinctly Christian tradition that speaks meaning into a world desperately searching for meaning in all the wrong places.