Why Study Greek - Part I 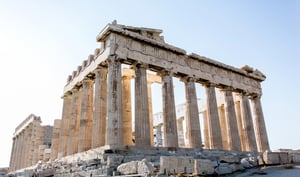 Classical educators are frequently asked why we teach “dead languages.” At Trinitas, we teach both Latin and Greek as part of our core curriculum, and we believe to do otherwise would make us something other than classical. We don’t cling to these languages out of some foolish consistency or for the sake of keeping up classical appearances. No, we cling to them for their unparalleled value as educational tools.

Some time back, Pastor Dennis Louis, who teaches our senior Greek class, wrote a brief apologia for teaching Greek. I have been planning to share it here and received just the nudge I needed in church yesterday when a Trinitas teacher pointed out to me how many of our students use their Greek New Testaments in church as their Bible of choice. Well done, classically educated students.

What follows is part one of the essay Pastor Louis wrote.

A case for a Christian Worldview of the Greek Language

Why study Greek? In times past, such a question would seem rhetorical, for the answer would seem obvious. It was generally understood that the study of Greek was not only normative, but essential. It was after all, the language in which our Lord chose to write his sacred scriptures of the New Testament. And many believed that a proficiency in Greek would lead one to a deeper understanding of God’s Holy writ. Aside from the obvious spiritual reasons, most knew that behind the study of the Greek and Latin lay roughly 60% of all English words and 90% of all technical and scientific terms. It was a given that the study of Greek as apart of a broader classic model, developed the mental acumen of a student in ways that other courses of study couldn’t. That in many ways, the Greek language served, as an intellectual nursemaid, the educated class – and that one would be academically malnourished without her. But such assumptions are no longer held. And instead of boldly asking “Why not Greek?” one has to wrestle with the question of “Why Study Greek?” What follows is a brief attempt to explain why Greek instruction is indeed vital for Trinitas and schools who engage in the classical model of instructing students.

Greek is useful for serving God

“Let me, to begin with, stress the fact that I think we both have essentially the same goal before us in our work. We are seeking to have modern man, in particular modern educated young men and women, accept Jesus Christ as he speaks to us with absolute and infallible authority in the original languages of the … New Testament as the Savior and Lord.” (In a Letter from Cornelius Van Til to Francis Schaeffer dated March 11, 1969)

We teach the Greek language (both Koine and Attic) first and foremost because Greek is the language of the New Testament. Biblical instruction is a central tenant of any classic education model. It is understood that one must teach to the whole man, both body and soul. While current educational models tend to focus more on the body (from the base of the neck and up to be more precise), classic education strives to go a step beyond and teach to the heart. This particular education model, ministering to the whole man, recognizes that education that feeds the mind and not the heart has the potential of producing depraved minds. C.S. Lewis puts the matter more in focus, “education without values is as useful as it seems rather to make man a clever devil.” As such, Bible instruction is paramount. Through regular instruction in the scriptures, students receive moral instruction on how to act in a responsible manner with the knowledge they have. Greek then provides a more accurate study of this vital moral instruction.

At this point, one may have two objections. Why not study the Bible in English and why not study Hebrew as well?

With respect to the former, studying English versus studying Greek is analogous to watching TV in Black and white (English) versus watching it in color (Greek). The richness and depth of the Greek language gives us a much more vivid and accurate picture of God’s word over a translation. As it pertains to the latter, we would grant that the study of Hebrew is a noble task. But it is a task that affords the students little overlap. Given curriculum restraints upon most schools, Greek affords the opportunity for immediate application in the New Testament and other disciplines.

As a final note in this section, we direct your gaze to the quote above. It has always been the assumption of the church that if one has the opportunity and the ability to study the language of scripture and the clarity that it affords, one should seize upon it! This is the assumption of Trinitas: that educated young men and women receive their instruction of the Bible from the fountain of the original languages.