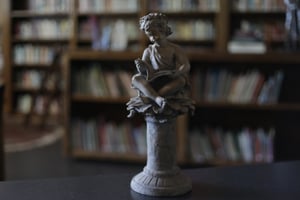 The benefits of learning Greek as a tool to sharpen one's mental abilities cannot be overstated.

“I would make them all learn English: and then I would let the clever ones learn Latin as an honor, and Greek as a treat.”       -Winston Churchill

This quote from Churchill at times can be taken out of context. It would appear that Churchill spoke of Latin as the cognitive sharpening tool of the clever. But a more careful reading would show that Churchill understood that both Greek and Latin were excellent tools for cognitive development.

One needs look no further than the Greek language itself. Consider the great lengths to which Greek students must go to remember the vast amounts of inflections for verbs, nouns, adjectives, and the like. Not to mention the various principle parts, crasis, ellipsis, and word amalgamations that a student has to master. In addition to this, students are taught to evaluate Greek verbs not in relation to their time (when the action occurs), but their aspect (what type or shape of the action). In Greek class, students interact with whole categories of the Greek language that are not present in Latin or English, such as the aorist tense, the optative mood, and the middle voice. All of the nuances and complexities mentioned here only serve to highlight the fact that Greek instruction sharpens and develops the mind in ways that other languages do not. Plainly put, studying Greek demands mental effort. The mental discipline, organization, and recall ability are all tools that are sharpened. And we would hasten to add, these are tools that are transferable to other disciplines and last a lifetime.

Greek Instruction as a Foundation for Education

“Not knowing what happened before you were born is to be stuck in childhood forever. What does a person’s life amount to without the historical consciousness that weaves one’s life into the life of earlier generations?” -Cicero 46 B.C

Much has been written on the classical education of the founding fathers, so we need not plow again that field. But I do want us to consider the fact that in times past, nation builders, architects of society, and crafters of constitutions were all classically trained. And to that point, just so it is not lost on us, to be classically trained is to study the classics (both Greek and Latin). We forget that men such as Thomas Jefferson, Alexander Hamilton, James Madison, and Jonathan Edwards were all classically trained. These were men that have had an incalculable impact on American society. One need only look to the writings of the founders to know that they had a great knowledge of the classics – for they quoted them often. Tracie Lee Simmons rightly notes in her book Climbing Parnassus: A New Apologia for Greek and Latin, “Americans view the Founding Fathers in vacuo, isolated from the soil that nurtured them.” Simmons' observation nicely rounds out Cicero’s comment above. Why do we often revere the fruits of classics education, while in the same breath salt the ground from which it sprung? History has taught us that the study of Greek is foundational to a well-trained mind. We need look no further than the admissions standards of Harvard’s early years – one only needed to know Greek and Latin! Of course I speak of an era long gone. Foundational are computers, math, science, French or Spanish, and other skills that help one in modern times prepare for globalization. And who can rightly argue against that. But consider this. Nation builders were fed and sustained on studying Greek and it served them well. We are yet to see the full impact of the training tools of globalization. For now, at least, let us stick to a standard that has proven to work. A standard whether knowingly or unknowingly, has shaped our lives for the better.