Of Pigs and Pupils: Fast Food, Modern Education, and the Growth of Classical (Christian) Schools 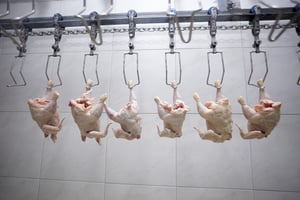 The classical school approach offers a fundamentally different vision of education that families fed up with a factory approach to learning find compelling.

The video opens with a peaceful, pastoral scene of a young farming family lovingly caring for their livestock while Willie Nelson sings Coldplay’s “The Scientist.” As the camera pans, efficiency supplants care, and the scene grows cold and gray. Countless pigs are mechanically transported along conveyor belts, injected with hormones, compacted, and speedily packed on trucks for dispersion. A factory replaces the farm; concrete and metal have replaced the hills, trees, and wood; machines replace humans.

Just when Nelson’s voice trails off with haunting despair, a lonely farmer has an idea to go “back to the start,” as Nelson sings with renewed hope. With the concrete now gone and the clouds lifted, a scene of plenteous pastures, blue skies, and real humans lovingly and proudly caring for their livestock returns. The video closes with the farmer loading a wooden crate on a Chipotle truck. In spite of Chipotle’s recent struggles, the story it movingly tells of a return to a more sustainable and humane approach to food is having a profound impact on how food is produced and consumed.

The story of education in America runs along a parallel track. By seeing the stories of modern food and education side by side, one can better understand the impulse behind the popularity of classical and classical Christian schools and the need for more radical, systemic changes within education.

Fast food, because it epitomizes (and indeed has given shape to) much of modern food production, serves as an apt entry point for seeing the connections between food and modern education. Ray Kroc believed he had stumbled on culinary gold when he visited Richard and Maurice’s McDonald’s restaurant in 1954. Kroc was struck by what he described as “the simplicity and effectiveness of the system” that the McDonald brothers had developed. “Each step in producing the limited menu,” Kroc observed, “was stripped down to its essence and accomplished with a minimum of effort.” By applying the principles of Henry Ford’s assembly line to the kitchen, the McDonald brothers developed a simple, quick, and consistent process for serving food. Kroc began aggressively spreading the McDonald brothers’ system, staking his golden arches across the nation, and beyond.

McDonald’s twin goals, speed and consistency, have transformed how food is produced, turning cooks into managers of apparatuses, equipment, and processes that rely mostly on quick wrist movements. These goals have not just affected the kitchen; farmers, too, have become managers of technologies that keep them a layer removed from land and livestock.

Efficiencies in production have shaped how Americans consume food. The dining experience at a fast food establishment follows the logic of efficiency and is stripped down to its essence. Guests are not served food in a traditional sense, but instead line up (often in cars), receive a number (perhaps a name for that personal touch), and a quickly packaged meal that the guest subsequently eats with the efficiency and utility of a fighter jet refueling in mid-air while on its way to whizzing action.

The McDonald’s approach to food has had far-reaching effects on how food is grown, dispersed, prepared, and consumed. Parallel changes have been at work in education for more than a century. These changes have created what may be best described as factory schools.

Like McDonald’s, modern education also values speed and consistency. Edward L. Thorndike, an early twentieth-century educator and psychologist, believed learning should be carefully measured and quantified. This goal led to the pervasive use of standardized testing in schools, a turn that radically transformed education. The quickness and ease with which these tests capture concrete data concerning student performance would make Ray Kroc proud.

The pervasive use of standardized tests alters the teaching profession, turning teachers into managers of data. Overwhelmed by piles of test scores and reporting demands, teachers often feel removed from students and find it difficult simply to teach. Just as the assemblers of fast food burgers must become machine-like in their work, teachers are rewarded for operating in a similar fashion, as collectors and processors of data with little opportunity to truly teach and develop their craft.

Test-happy, data-driven schooling not only transforms the work of teachers but also shifts authority away from classroom teachers and into the rarefied realm of administrators, superintendents, educational consultants, and state and national entities. When consistency is paramount, educational decisions inevitably move further upstream from the classroom. Consider Dale Russakoff’s The Prize, which details how politicians and educators in Newark, New Jersey fumbled Mark Zuckerberg’s generous gift by keeping the energy, effort, and dollars away from the classroom and teachers. The work of James Arthur, Kristán Kristjánsson, et al. underscores a similar situation across the Atlantic. Thanks to the goals of speed and consistency, teachers’ authority has been driven to the periphery and replaced by “edu-business” (a clunky, impersonal collection of administrators, superintendents, and educational consultants).

The same fighter-jet utility that characterizes how many Americans consume food also characterizes student learning in modern schools. John Dewey, who has left an indelible mark on modern education, believed schools must prepare students for the practical exigencies of life in an industrialized age. Dewey, writing in 1899, explained:

From the standpoint of the child, the great waste in the school comes from his inability to utilize the experiences he gets outside of school in any complete and free way within the school itself; while, on the other hand, he is unable to apply in daily life what he is learning at school. That is the isolation of the school – its isolation from life.

Dewey’s dictum on the importance of a practical education lives on. The elimination of cursive from many school curricula is rooted in the notion that cursive has lost its utility; after all, people now spend most of their lives typing. A pragmatic understanding of education finds it difficult to justify the place of cursive (or any type of handwriting) in a school curriculum, just as fast food restaurants don’t bother with hors d’oeuvres. However, broaden the scope of education, and cursive and handwriting become of critical importance. Andrew Kern of the Circe Institute roots the value of learning cursive within education’s historic and broader purpose of “cultivat[ing] the human-ness of the student.” Kern continues, “Handwriting is a uniquely human ability. No other animal has ever been able to imitate it, much less come up with it.” But modern education shrinks the students down to their potential instrumentality within the economy. Consequently, the fluid grace of cursive is easily replaced by the pragmatic peck of keys.

Curiously, despite efforts toward standardization in both fast food and education, each makes unprecedented efforts toward hyper-tailored offerings. Thorndike claimed it was “useless to recount the traits in which men have been found to differ, for there is no trait in which they do not differ.” Differentiated learning and individualized educational plans are the modern educational fruits of Thorndike’s conviction. Burger King’s slogan, “Have It Your Way,” captures the parallel goals of the fast food industry.

True, there’s something equitable and gracious about seeking to serve the individual needs and preferences of students and customers. Indeed, in the realm of education such a pursuit is critical to serving students well. The problem, though, is what is forfeited when attempts at individualization consume the educational process. The forest tends to get lost for the trees. Questions common to all humans get lost in the shuffle. In the same way that fast food, in a pragmatic effort to satisfy the needs of a busy populace, failed to account for the deeply human activity of sharing a meal with another, education tends to orient itself around individual needs and loses the broader telos of educating people. When educators operate in a vocational framework, schooling only needs to address the individual, vocational needs of the moment. Such a pedagogy is rooted in a flawed anthropology, an anthropology that reduces individuals to their instrumentality.

From Farms to Factories, and Back Again

The argument that the story of how we produce, prepare, and consume food parallels the story of education is not new. A quarter of a century ago, George Ritzer made a similar claim. Yet it is remarkable that, while there is widespread critique of nearly every aspect of the modern food industry, there is comparatively little concern regarding how we educate our children. Education needs to be shaken by a foundational critique, similar to the one aimed at food production and consumption over the last twenty-five years.

Unwittingly, the Chipotle video provides such a critique, for if we replaced the pigs with pupils and farmer with teacher, we would have a fairly accurate telling of the story of education over the course of the last century. The growth of the classical Christian school and classical school movements is due to large numbers of parents who seek an education that that goes “back to the start,” as Willie Nelson sings in the Chipotle video. These parents find in classical education an approach that does not merely treat children as future cogs in the economic machine but reckons with the existential and social realities kids face. It’s an education that works with the grain of a student’s humanity.

The change in settings is perhaps where the Chipotle video offers its most trenchant critique of modern education. The move from a farm to a factory applies so well to what’s happened in education over the last century. The metaphor of the farm for the school is apt because farms must honor the delicacy of the ecosystem or environment. Envisioning education more as a farm both deepens the educational task and forces educators to relinquish control. The farmer is surrounded by an environment that continually eludes his or her control. Farmers do not actually make anything grow; they simply cultivate optimal conditions for the land to produce. In a similar way, teachers are not in control of their students; they must simply cultivate the conditions that will help their students grow.

Factories, on the other hand, prize control. Schools operating with a factory approach, in an effort to maintain the illusion of control, reduce the educational task to that which can be controlled: testing. In the process, students become an abstraction. With a factory approach to education, the role of critical factors such as parents, neighborhood, religion and metaphysics, diet, and sleep habits move to the periphery.

The classical school and classical Christian school approach offers a fundamentally different vision of education that families fed up with a factory approach to learning find compelling. What’s needed is the kind of educational climate that encourages educators, families, and communities to develop alternatives to the factory approach to education. Too many educators and administrators seem content to carry on with the same discussions that fail to challenge the status quo. Perhaps the school choice movement can provide the kind of paradigm-busting shake-up that has affected the food industry and helped Americans eat better. Whatever the path taken, educators must think deeply about how best to educate children in a way that accords with their humanity.

Shutt, Casey. "Of Pigs and Pupils: Fast Food, Modern Education, and the Growth of Classical (Christian) Schools." Public Discourse, The Witherspoon Institute, March 4, 2018. Casey Shutt is the assistant headmaster of the Academy of Classical Christian Studies in Oklahoma City. He owns Mindhenge Artifacts, a company supporting education that stands the test of time.